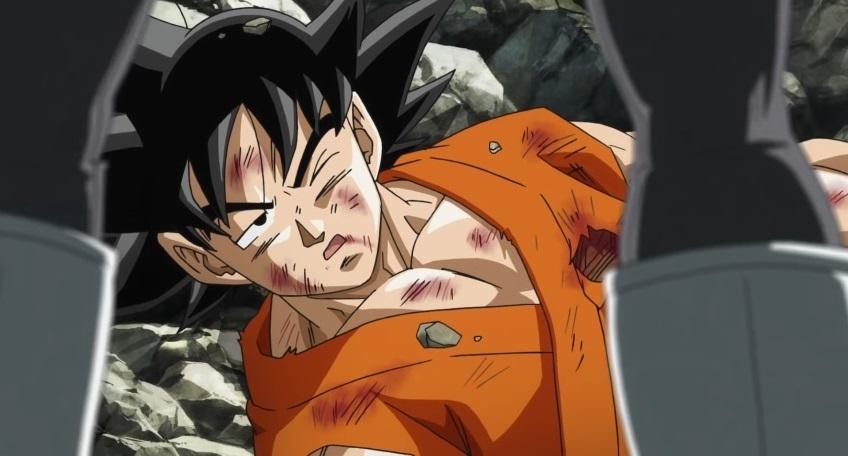 Many manga readers have expected the story arc featuring planet-eater Moro as the main villain would be over in “Dragon Ball Super” chapter 65. Early leaks, however, suggest that he has more tricks up his sleeve and they may be even more dangerous than what he can do before fighting Angel Merus.

An earlier revealed “Dragon Ball Super” chapter 65 drafts summary claimed that Goku is going to allow Moro to recover by handing him a senzu bean. Now, a reported leaked page from chapter 65 shows Moro standing tall (no longer pinned down by a boulder) and looking at an orb on his hand that has Merus’ face on it.

One of the theories fans have that would explain this event in “Dragon Ball Super” chapter 65 is that the arm Merus previously cut may have regenerated and Moro could now be using it along with the copied abilities from the Angel. The same page shows Moro placing the Merus orb on his forehead, which practically says he would now be fighting with Angel abilities.

Another supposed “Dragon Ball Super” chapter 65 page has also leaked showing Moro seemingly becoming a part of the earth and breathing out a giant beam of light toward Goku. The Saiyan, despite maintaining the mastered UI form, appears surprised by what his opponent can do. It is yet to be seen how Goku would counter this attack.

Recap: What happened during Moro and Merus’ fight

To understand the “Dragon Ball Super” chapter 65 leaks, it is important to recall some details from Moro’s fight with Angel Merus. A couple of chapters ago, Merus sacrificed his life when he decided to use his Angel abilities to help taking down the planet-eater. Moro touched the back of Merus’ neck with his right hand suggesting the villain was able to copy his fighting abilities.

However, before Moro can do anything with it, Merus cut the villain’s right arm and later destroyed all three orbs on his hands and his forehead. Merus’ efforts practically neutralized Moro, and his defeat seemed inevitable as Goku later achieved the mastered Ultra Instinct. This led to many fans believing that the villain would be facing his demise around “Dragon Ball Super” chapter 65, but the leaks suggest that would not be the case.

“Dragon Ball Super” chapter 65 will be released on Tuesday, Oct. 20. Its official copies with the English translation will be available for free on Manga Plus and VIZ Shonen Jump.