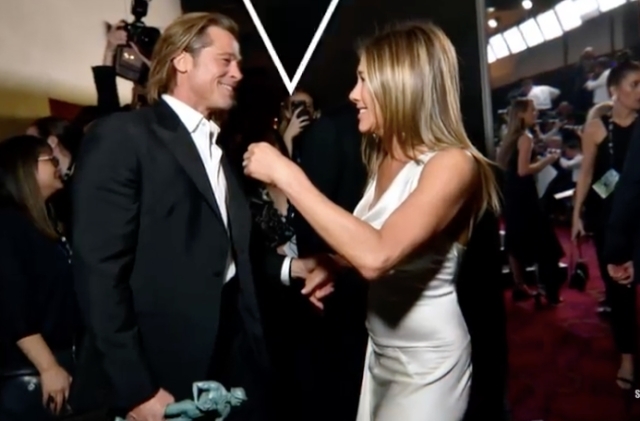 Jennifer Aniston and Brad Pitt got married in the year 2000 but sadly, they parted ways in 2005. While together, they were the famous “Golden Couple” in Hollywood and many think that they are perfect for one another.

Their separation was not good at all because there were cheating allegations on Brad Pitt’s part. Although they did not say this is the reason for their divorce, many believed it was because of the actor who fell in love with Angelina Jolie while they were filming “Mr. and Mrs. Smith.”

The actor went on to marry the “Maleficent” star while Aniston tied the knot with Justin Theroux. Unfortunately, Brad and Angelina’s marriage did not work and they ended up filing for divorce in 2016, just two years after their wedding.

On the other hand, Jen and Justin also separated in 2017. Since splitting from their respective spouses, fans were hoping for a reconciliation between Brad Pitt and Jennifer Aniston and they got more excited when their interactions were widely covered in media outlets.

Now, as Brad Pitt and Jennifer Aniston are marking their 20th year anniversary on July 29 if they have remained married, it was rumored that the two are rekindling their romance instead. Since they are divorced, New Idea magazine reported that the pair will celebrate together and suggested reconciliation on the day they once got married.

“Their rekindled romance has delighted fans the world over, and Brad and Jen are now enjoying an emotional walk down memory lane as they celebrate the 20th anniversary of their original nuptials,” an insider allegedly told the magazine.

“The last 20 years have been a roller-coaster ride, that’s for sure,” a supposed unnamed friend said. “At the end of the day, Brad and Jen are so happy they’re still in each other’s lives. They have so much love for one another.”