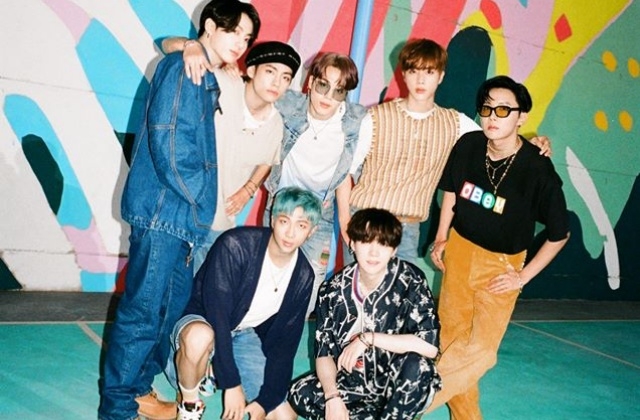 BTS has been busy despite the coronavirus pandemic. The group continued to release songs and albums even while they were a bit restricted to carry out their promotions in an all-out manner.

After dropping an album in April, releasing tracks and holding online shows, BTS is back to gift their fans with a new English song called “Dynamite.” This is a very much anticipated release because it is a song that fans around the world could easily sing at once since it is in full English.

Big Hit Entertainment already dropped a series of teasers for this upcoming track and that gave everyone a hint at what to expect. The agency posted photos of BTS and these gave a retro vibe.

All of the BTS members are dressed in retro style vibrant-colored ensembles and some of them have colored their hair as well. RM is sporting his famous blue hair again as they begin the countdown for the release of “Dynamite.”

Big Hit Entertainment also released BTS’ schedules for the promotion for the said new single. It was indicated that the promo activities for “Dynamite” will be capped with a performance at the upcoming MTV’s Video Music Awards on Aug. 11. In any case, the track will officially be released on Aug. 21.

Meanwhile, BTS previously made videos to teach the Korean language to their fans around the world. This was originally a show created by Big Hit and it’s called “Learn! KOREAN With BTS.”

Now it was revealed that the videos of this BTS series will now be used to teach the language in schools and universities worldwide. On Aug. 12, Big Hit’s educational branch Big Hit Edu, Hankuk University of Foreign Studies and the Korea Foundation signed a contract as they go hand in hand to promote Korean culture and language overseas.

As per OSEN News, the agreement will contribute to the growing demands for Korean lessons in many countries. BTS’ “Learn! KOREAN with BTS” will be offered in universities and colleges such as the Middlebury College of the United States, Ain Shams University of Egypt, École Normale Supérieure, EDHEC Business School of France and University of Languages & International Studies and the Than Long University of Vietnam.