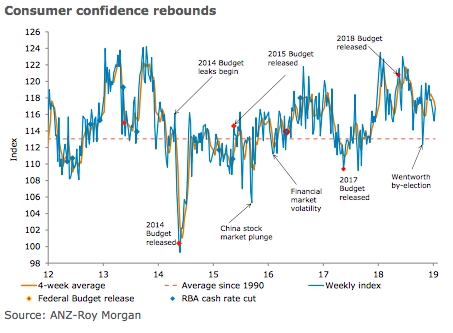 There was a marked improvement in the ‘time to buy a household item’ index, with it registering 3.9 percent growth. This took the index to its highest level since the first half of October and above the long-run average. Four-week moving average inflation expectations were stable at 4.3 percent.

"Consumer confidence was up 1.4 percent last week thanks to a good showing from the ‘financial conditions’ and ‘time to buy a household item’ indices. This increase reverses a good portion of the decline captured in the first survey of 2019 and consolidates consumer confidence at a level comfortably above the long-run average. The resilience shown by Australian households amidst weak global and domestic cues is encouraging. Robust job vacancies data may have played a role," said David Plank, ANZ’s Head of Australian Economics.