Women have been a lot less visible in this UK general election campaign – why? 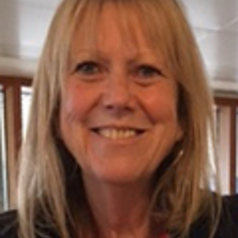 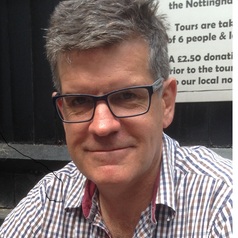 Every general election is haunted by the ghosts of campaigns past. The most significant spectre in 2019 has to be Nancy Astor, who on December 1 1919 was the first woman to take her seat in the House of Commons as an elected member of the UK parliament – and to whom a statue was unveiled in Plymouth on November 28, the anniversary of her election. One wonders what she would make of the gender politics of this campaign.

The omens were not good from the outset. The prime minister was criticised for his sexist phraseology, separately describing Jeremy Corbyn as “a big girl’s blouse” and David Cameron as “a girly swot”.

Meanwhile, Alun Cairns resigned as Welsh secretary after allegations emerged that he knew of an aide’s role in sabotaging a rape trial. He has vowed to “clear his name”. Alarm has also grown about the horrific abuse women MPs, particularly those of colour, suffer online and in the streets.

In a speech this week at the unveiling of Astor’s statue, Theresa May, the former prime minister, voiced concern that the decisions by several influential female parliamentarians not to seek re-election were linked to the growing toxicity of public life.

The media play a vital role in promoting gender equality in politics and challenging discriminatory practices and discourses. This was a cornerstone of Liberal Democrat leader Jo Swinson’s failed legal challenge against ITV for excluding her from the televised Leaders’ Debate on 19 November. Party considerations aside, she argued the broadcaster’s decision reduced significantly the visibility of a female political leader as a role model for young girls and women. As Marian Wright Edelman once said about the need for positive and diverse female representation: ‘You can’t be what you can’t see’.

Loughborough University has been monitoring the gendered aspects of the reporting of the 2019 campaign as part of its wider “real time” audit of mainstream news coverage. The most basic but significant aspect of this has been to quantify how often women are reported and quoted in election reporting.

As we show in our latest report, in the 2015 general election, women political candidates and campaigners accounted for only 15% of all appearances in the media. This rose to 39% in 2017. In the 2019 campaign so far, and with a record number of women standing for parliament, female appearances have nearly halved to 20%.

This is a direct consequence of the replacement of Theresa May as prime minister by Boris Johnson in the interim period. UK general election news is renowned for being highly “presidentialised” and dominated by the two main parties. Boris Johnson accounts for 56% of all Conservative party appearances in the media we have analysed so far.

In this respect, you could argue that news organisations are prisoners of the decisions of the main parties. Gender divisions are inescapable if leading parties fail to promote women internally and promote their views publicly.

But what about the instances where news organisations have a more active role in deciding who speaks? Election coverage isn’t just about politicians – citizens are consulted frequently and a myriad of commercial, political and public bodies pursue media access to intervene in the public conversation. Journalists also seek out expert and professional opinion to appraise the validity of candidates’ promises and propositions.

Figure 1 compares the frequency with which people outside the party-political realm have either featured in coverage as citizens or in a professional capacity. There is only one category where women were reported more than men - in their personal capacity as “citizens”. In all but one professional category, men dominate the show, with the gender disparity most acute in the reporting of “unions/ charities/ NGOs”, “think tanks”, “pollsters” and (ahem) “academics”. 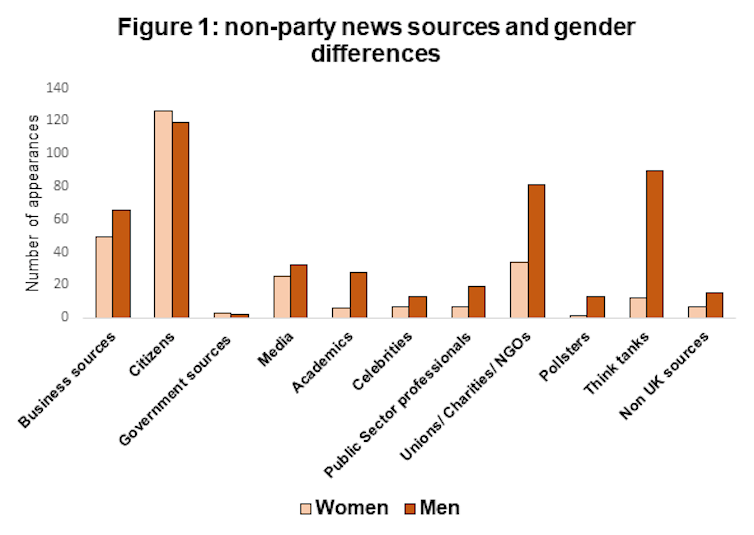 Figure 1: representation in the media by gender. Loughborough University

But what of the difference between media sectors? Are the broadcasters performing better on these measures than the press? Figure 2 assesses the gender distribution of quotation within the four most prominent non-party political categories, differentiating between TV and newspaper coverage.

The results show that imbalances are evident across TV and the press. Women were quoted more than men in only two categories – TV vox pops of citizens and newspaper articles quoting representatives of business. The main reason for the female majority in the latter was a lengthy interview published in the Financial Times with Carolyn Fairbairn, the director-general of the Confederation of British Industries – a notable exception to a consistent pattern of “mansplaining”. 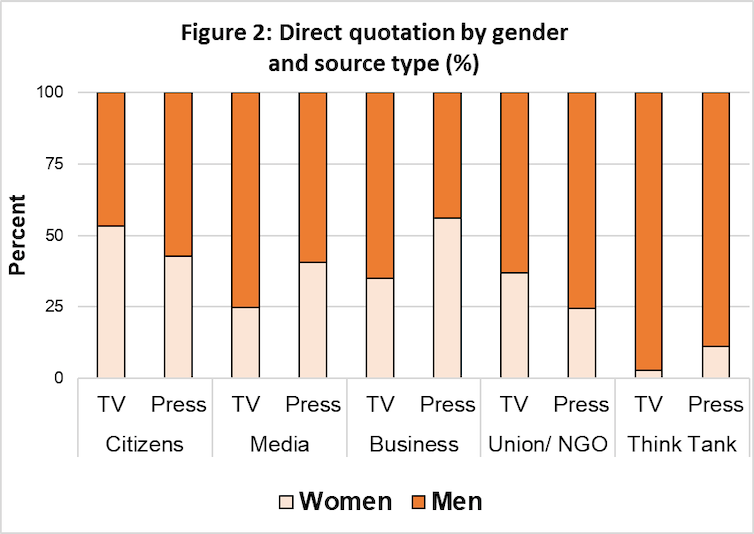 The professional is political too

There is plenty that is depressing about these findings, but nothing surprising. Loughborough University’s research on media coverage of UK elections over 27 years has demonstrated how recurrent and enduring these patterns are.

Is change possible or likely? This week, the prime minister marked the Astor centenary by promising to “support women to reach their full potential” in the event of a Conservative election victory and commit the Conservatives to fielding as many women as men in future elections. Elsewhere, the BBC has recently launched a 50/50 project aimed at securing 50% female contributions in BBC programmes.

There is no question that joint action is needed by politicians and news organisations. If editors and journalists have no control over who the parties put at the forefront of the campaign, they have undeniable gatekeeping power over the non-party voices they select. Women’s voices deserve recognition beyond the personal sphere. To adapt a familiar feminist maxim: the professional is political too.