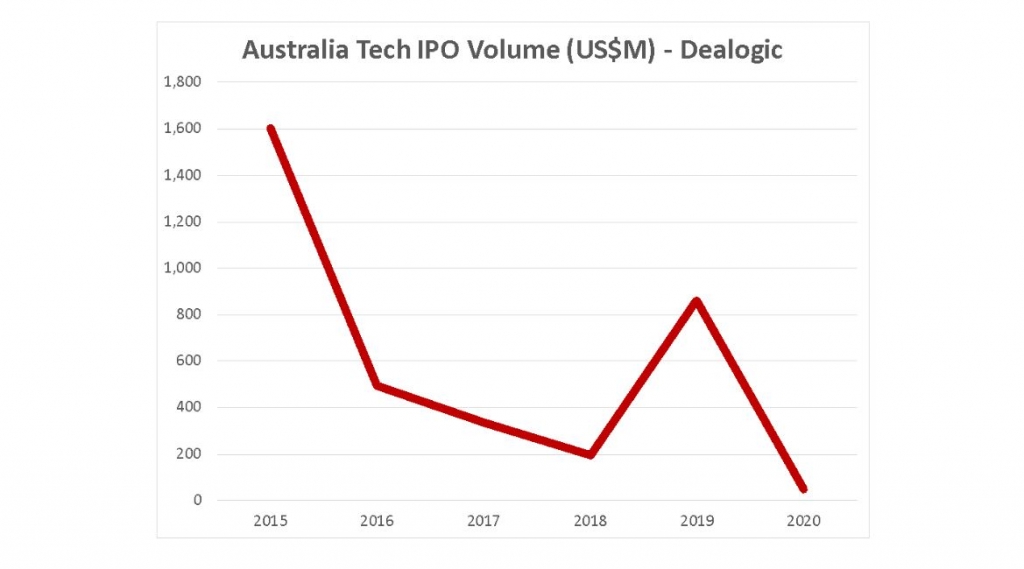 The Australian government has made no secret of its wish to become a center of technology and innovation. But when it comes to attracting tech companies to list their shares, regulators have instead gone out of their way to scare off the very best.

In 2015, Australia’s future looked bright as technology-sector IPOs reached a record $1.6 billion in new listings, according to data provider Dealogic. That was just shy of the $1.7 billion of tech IPOs done in Hong Kong – long considered the premier financial center in the Asia-Pacific region. It appeared, if only for a fleeting moment, that Australia was evolving from an economic backwater into a first-world financial center for technology companies on the map with Hong Kong, London, and New York.

But while IPOs boomed around the world (Hong Kong’s annual totals well into the billions most years) Australia’s suddenly went into decline. Tech IPO volume has declined steadily since 2015, with only a couple of microscopic floats in 2020 totaling just $47 million versus $705 million in Hong Kong.

It’s hard to overstate the disappointment Australia faces. Experts flagged the potential of the Aussie tech scene in 2012, arguing there was an opportunity for incredible growth. Since then, the Australian government has tried relentlessly to create a technology center and reap the economic benefits. In 2018, for instance, the New South Wales government said it would establish a new technology industry hub in Sydney. At the time, Premier Gladys Berejiklian touted the hub as Australia’s Silicon Valley that would “be the home of 10,000 new jobs in the future.”

Earlier this year, as Aussie tech IPOs floundered, the ASX attempted to paint a rosier picture by launching the S&P/ASX All Technology Index, which local press proudly dubbed the “Aussie Nasdaq.” Max Cunningham, ASX’s Executive General Manager of Listings and Issuer Services, used the launch to proclaim “ASX is a genuine home for technology companies. It’s a place where they can access a plentiful supply of capital, institutional investors, and market valuation to support entrepreneurship and innovation.”

But are technology companies really welcome on the ASX? Consider the case of GetSwift Limited, a last-mile logistics company that listed in Sydney in late 2016. For the last two and a half years, The Australian Securities and Investments Commission (ASIC) has pursued a crusade against GetSwift, which went public when it was very small but has since quickly expanded around the world to become a global operator.

The thrust of ASIC’s lawsuit is that GetSwift deliberately made inaccurate announcements about client partnerships – an accusation that looks increasingly unlikely to hold up in court. Indeed, a recent deposition by an executive at Commonwealth Bank of Australia, the country’s second largest company by market capitalization, indicated that it approved an announcement given to GetSwift that was expected to be the focal point of ASIC’s case. That revelation almost certainly indicated that ASIC – which had interviewed the executive previously – had ignored facts learned from Commonwealth Bank of Australia that would have interrupted its mission.

The unfounded attack and associated negative press make clear it was extremely dangerous to operate as a public technology company in Australia. That’s especially true of companies that are trying to focus on winning new business and expansion.

Contrary to Gladys Berejiklian’s hope that Australia would add thousands of jobs, GetSwift and others have likely feared investing more resources down under. And, of course, with the ASIC lawsuit, GetSwift has instead spent heavily on legal bills: Public filings show it is pouring millions of dollars per quarter in legal fees, money that could also have been spent on marketing for new customers.

Despite the attack, GetSwift has forged on, winning contracts with giants such as Heineken N.V. and Yum! Brands, Inc., along with government-backed organizations seeking efficient ways to beef up food delivery to those in need.

GetSwift’s revenue rose 700% in the first quarter, in part because restaurants have accelerated their shift toward a delivery model. Many of those restaurants are frustrated with the likes of GrubHub and Uber Eats, which charge hefty fees and erode already-thin profit margins at restaurants.

Investors have noticed GetSwift’s success. The company’s shares have risen 50% in 2020, with major U.S. investors adding to their positions. Fidelity International recently raised its ownership to 9.5% while three other investors who collectively own 25% of the company wrote a letter expressing their support of GetSwift’s senior management.

Today, GetSwift employs hundreds of staff and is headquartered in New York. Other promising tech companies with global aspirations have a choice about where to list their shares. Given the treatment GetSwift received, it’s no wonder Australia isn’t high on their lists.