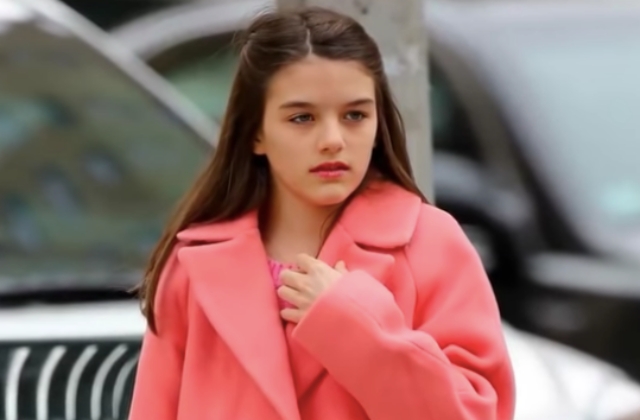 Suri Cruise is reportedly stressed out because she noticed that her mom Katie Holmes is losing weight, and she doesn’t look healthy. The teenager is said to be really worried because her mother is not having her meals that she even had to beg her to eat.

As per NW magazine, while other teens of Suri Cruise’s age are enjoying their time being with friends and focusing in school, she had to give her attention to her mom or else, her well-being could turn worse. The magazine reported that Katie Holme’s weight loss may have resulted from her break up with Jamie Foxx.

While many people think it was because of heartbreak, Katie Holmes supposedly told her friends that she is actually losing weight deliberately for her upcoming fashion endorsement deal. She insisted that she needs to shed some pounds to fit in the image for the endorsement, but it seems this is just an excuse.

“Katie runs out of energy after a short walk and underneath the make-up, she is gaunt and grey,” an insider supposedly told NW. “Suri is a smart kid, she noticed the change in Katie and is doing her best to get her to eat. She bakes cookies and muffins for her mom all the time, but Katie only pretends to eat them.”

The source further said that it was good that Suri Cruise grew up to be a mature kid that she knows when she needed to step up and take care of her mom. The 14-year-old knows that her mom is not looking after herself, so she takes the matter into her hands and pushes her to eat to be healthy again.

The insider further alleged that Suri Cruise already thought of her next step. In case she is not able to succeed in her mission, and her mom Katie Holmes still fails to gain weight, her plan is to contact her dad Tom Cruise.

It was said that the last thing that Katie wants is to let her ex-husband know about her condition. She ran away from him and getting him involved this time will be humiliating for her. Thus, Suri may be taking the wrong move here if she indeed asks help from her dad.

At any rate, this is obviously a false story because first and foremost, Katie Holmes did not lose weight. If she indeed shed some weight, it is not to the point to make Suri Cruise worried. The “Dawson’s Creek” actress is not struggling with her health after breaking up with Jamie Foxx and in fact, she has moved on already.