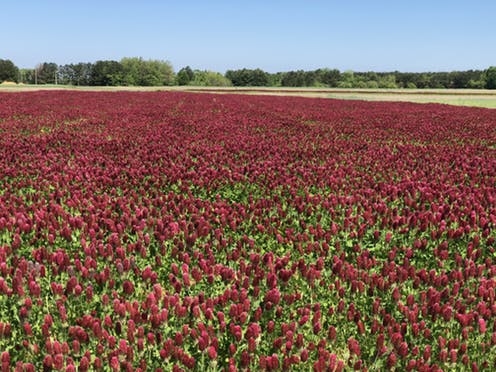 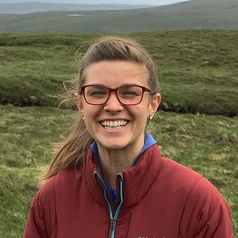 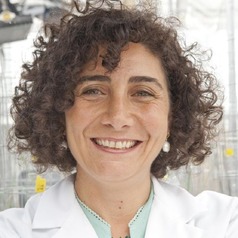 Human society is literally built on soil. It feeds the world and produces vital fuel and fiber. But most people rarely give soil a second thought.

Recently, though, soil has been getting some well-deserved attention from environmental organizations, policymakers and industry leaders. It has been covered in news articles, argued over in policy debates and has even received an international day of recognition.

Why all this attention? Because the world urgently needs ways to keep carbon out of the atmosphere, and to build food security for a rapidly growing global population. Soil can do both.

However, current efforts to promote carbon storage in soil miss a key point: Not all soil carbon is the same. As scientists focusing on soil ecology and sustainability, we believe that managing soil carbon effectively requires taking its differences into account. 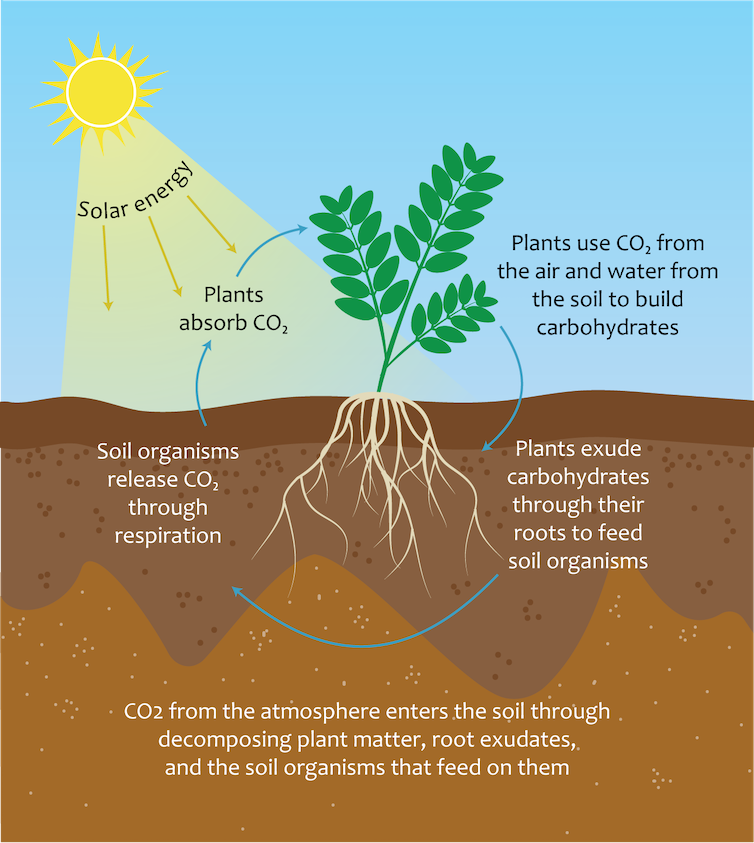 How carbon cycles into and out of soil. Jocelyn Lavallee, CC BY-ND

But carbon in soil doesn’t exist on its own. It is combined with oxygen, hydrogen, nitrogen and other elements, in compounds that scientists collectively call soil organic matter. This material is amazingly complex stuff, made of thousands of different chemical compounds that remain from the decomposition and transformation of plants, animals and microorganisms.

Adding to this complexity, carbon can be found in different physical states within soil. It can be dissolved in water, present as larger chunks or “particulates,” enveloped by soil particles or bonded to minerals. These various forms all behave differently, and ultimately have very different impacts on plant growth, soil structure and carbon sequestration.

The challenge is how to conceptually divide up all of these different forms without getting completely lost in the muck. The soil science community – yes, we are out there! – has been studying this question for decades. As we discuss in a recent study, one key distinction can provide an underlying framework for soil carbon management: particulate organic matter versus mineral-associated organic matter.

The world’s soils are rapidly deteriorating due to soil erosion, nutrient depletion, loss of soil organic carbon and other threats.

Particulate organic matter is the stuff you generally can see. It contains partially decomposed organic fragments, such as tiny bits of leaves or roots. Mineral-associated organic matter consists mostly of microscopic coatings on soil particles, derived mainly from the bodies and byproducts of microorganisms and certain plant compounds.

One key difference between the two is that mineral-associated organic matter is stuck to soil particles, so it tends to stay there for a long time. Particulate organic matter, on the other hand, is freely available to microorganisms, so it gets broken down much faster. It’s also more vulnerable to agricultural practices like tillage that disturb the soil.

A second key difference is their nutrient contents. Remember that organic matter contains not just carbon but lots of other elements, including nitrogen, a natural fertilizer that plants need to thrive. 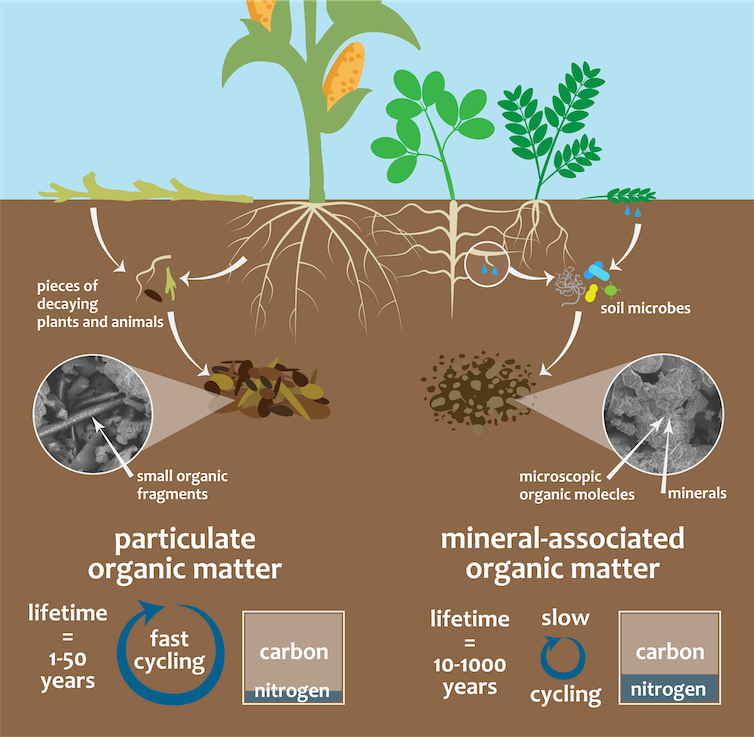 Overview of how particulate and mineral-associated organic matter form and function. Jocelyn Lavallee

It helps to think about these two types of soil carbon like a checking and a savings account. Particulate organic matter is the checking account: It receives money every payday, but gets spent pretty quickly to cover everyday expenses. Mineral-associated organic matter is the savings account. It usually receives less money from each paycheck, but that money isn’t spent as quickly.

When humans face a big unexpected expense, they typically will drain their checking accounts and may also dip into their savings accounts. If this happens over and over, eventually both accounts go broke.

This is exactly what happens when an ecosystem loses lots of soil carbon – for example, when a meadow is plowed and converted to crop fields. Plowing causes faster carbon breakdown, so the existing particulate organic matter is lost rapidly. Mineral-associated organic matter is often the only thing left to help sustain soil life and plant growth.

To make matters worse, annual crops tend to have tiny roots that do not add much carbon into the soil; put another way, they have very low paychecks. This means that particulate organic matter and mineral-associated organic matter aren’t replenished and continue to decline. Without a boost of “cash,” in the form of more decomposing plant matter, soils will go broke and become less healthy and productive.

Initiatives such as “4 per mille” and Terraton aim to sequester huge amounts of carbon in soil. The 2018 U.S. Farm Bill includes the first-ever incentives for farmers to adopt practices aimed at improving soil health and sequestering carbon. But these initiatives are missing a key point: not all soil carbon is the same.

Natural healthy soils show us that providing continuous and diverse plant inputs that reach all the way to deep soil are key for achieving both high mineral-associated organic matter storage and particulate organic matter recycling. There are many promising ways to do this, such as maintaining plant cover on fields year-round; growing diverse crops that include high-nitrogen legumes and perennials with deep roots; and minimizing tillage.

However, not all soils can accumulate both mineral-associated organic matter and particulate organic matter. Before implementing any management practices for carbon sequestration, participants should first assess the carbon storage potential of the local soil, much as a doctor studies a patient before prescribing a cure.

Sequestering soil carbon effectively requires an understanding of how particulate organic matter and mineral-associated organic matter work, how human actions affect them, and how to build up both types to meet our planet’s climate and food security needs.