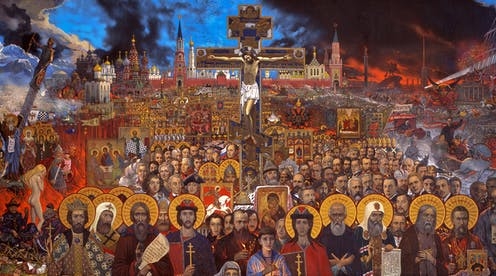 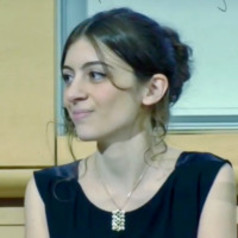 Cosmism, a complex intellectual movement that blends Orthodox theology with scientific forecasting, emerged almost 150 years ago and is once again on the rise in Russia. Part of the country’s elite holds Cosmism as a distinctively Russian response to the supposedly dominant transhumanism in the West. What is Cosmism, and how is it spreading in Russia today? 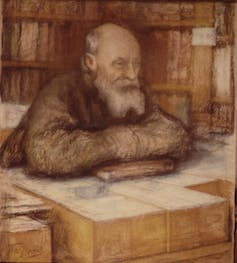 At the end of the 19th century, the Russian thinker Nikolai Fyodorov (1829-1903) defended a deeply moral and Christian philosophy of science. He imagined that humanity could employ technological progress to achieve universal salvation. According to him, scientific advances could be used to resuscitate ancestors, achieve immortality, transform human nature toward its deification, and finally, conquer and regulate the cosmos.

After Fyodorov, renowned Russian scientists – such as the forerunner of cosmonautics Constantin Tsiolkovsky (1857-1935) or the founder of geochemistry Vladimir Vernadsky (1863-1945) – built up on his futuristic and spiritual vision of technical progress.

In the 1970s, a group of Soviet intellectuals became passionate about the esoteric theses of these authors and brought them together under the name of “Russian Cosmism”. In contrast with the official communist ideology, Cosmism was a heterodox theory. It nevertheless aroused the interest of academics as well as high-ranking members of the political and military establishment.

One of these was Lieutenant-General Alexey Savin, the director of the secret unit 10003 in charge of research on the military use of paranormal phenomena from 1989 to 2003. Inspired by his reading of Vernadsky, he developed the principles of a science of the extraterrestrial world called “noocosmology”. Likewise, in 1994, Vladimir Rubanov, deputy secretary of the Russian Security Council and former director of the KGB’s analytical department, proposed to use Cosmism as the basis of “Russia’s national identity.”

Today, Cosmism still serves as a source of inspiration for ideologues in search of a national idea for post-Soviet Russia. The legacy of Cosmist thought is particularly claimed by a conservative think tank close to power, the Izborsky Club, which was created in 2012.

This group brings together about 50 academics, journalists, politicians, entrepreneurs, clerics and ex-military around an imperialist and anti-Western agenda. Supported in part by funding provided by the presidential administration, the Izborsky Club aims to define an ideology for the Russian state. In this regard, members of the Club consider science as an ideological battlefield, within which Russia must oppose its own “technocratic mythology” to the Western model of development. The latter is roughly associated with transhumanism, a concept behind which members of the Izborsky Club rank both explicit advocates of transhumanism such as Elon Musk and any worldview that derogates from their vision of traditional society such as feminism, globalization or sustainable development.

While some Western transhumanist thinkers identify Fyodorov as the prophet of their quest for immortality, the Izborsky Club on the contrary claims the specifically Russian character of Cosmism and its intimate connection with the “historical mission” of the Russian people. The November 2020 issue of the Izborsky Club journal meant to demonstrate the opposition between Cosmism and transhumanism.

Accordingly, transhumanism is the logical heir of evolutionary progressivism, aimed at emancipating the individual from the constraints of human nature through their hybridization with the machine. In contrast, Cosmism is described as an eschatological quest for the spiritualization of humanity, guided by a literal interpretation of the biblical promises of resurrection. If the authors of the Izborsky Club journal denounce a purely scientist faith in the technical improvement of man, they also stand apart from a bioconservative or ecological technophobia. Cosmism thus serves as the basis for a syncretic ideology that they entitled “technocratic traditionalism”, and which combines technological modernity with religious conservatism.

This ideology allows to join together the different legacies of the Russian history. In this view, the technological and industrial power of the Soviet Union harmoniously unites with the traditional Orthodox values of Tsarist Russia. Furthermore, the president of the Izborsky Club, Aleksandr Prokhanov, a well-known writer and editor-in-chief of the far-right newspaper Zavtra, coined the expression “Cosmism-Leninism” to argue that the fundamental meaning of Lenin’s industrialist utopianism emanated from the “doctrine of the Russian Cosmists” and extended it. The reinvention of the Cosmist heritage thus produces a unified national narrative that responds to Vladimir Putin’s regime’s aim to obliterate memory conflicts and [“link historical eras” in order to claim that “Russians have a common, continuous history spanning over 1,000 years”.

In addition, the Izborsky Club promotes Cosmism as the basis of a “new global alternative development project that Russia could express and propose”. The marriage of modern science with political traditionalism indeed intends to offer an alternative to the Western theories of modernization, which assume that economic development brings about the political convergence of societies toward liberal democracy. Contrary to the libertarianism and cosmopolitanism that they attribute to Silicon Valley, the ideologues of the Izborsky Club advocate the Stalinist model modernization, led by an authoritarian state and a collectivist economy.

In their view, Cosmism stands in place of the fallen ideal of Bolshevik society and therefore allows to renew an imperialist and messianic conception of the finality of science. The major scientific achievements promoted by the Izborsky Club (space and submarine exploration, Arctic development, research on improving human capacities) serve the defense of the “Russian civilization” and its “spiritual security”. Science thus becomes the vector of realization of the “Russian dream”, which is meant to replace the American dream with “the ideals of Russian Cosmism” and of a “spiritual science”.

A vision increasingly shared at the highest levels of power

The Izborsky Club is connected to influential power networks that allow the circulation of its ideas. In July 2019, Aleksandr Prokhanov was invited to the Duma, the Russian Parliament, to present his film Russia: Nation of Dream, in which he promoted his vision of a national scientific and spiritual mythology. The Izborsky Club is also close to key figures in the conservative elites – the monarchist oligarch Konstantin Malofeev and Dmitry Rogozin, the director of the Roscosmos Space Agency. Finally, it has access to the military-industrial complex. As a witness of these links, a strategic bomber carrier of missiles, Tupolev Tu95-MC, was named after the Club, “Izborsk”, in 2014.

Beyond the Izborsky Club, references to Cosmism permeate the discourse of the highest authorities. Valery Zorkin, President of the Constitutional Court, recently quoted a fervent advocate of Cosmism, Arseny Gulyga (1921-1996). In his speech at the 9th St. Petersburg International Legal Forum in 2019, he called for a broadening of the meaning of the common destiny of the Russian people written in the Constitution to a more general acceptance turned toward “universal salvation”.

Cosmism therefore serve as the foundation for a new Russian national mythology that matches the two imperatives of the current regime: a technological race for power and the definition of an alternative political model to Western modernity.