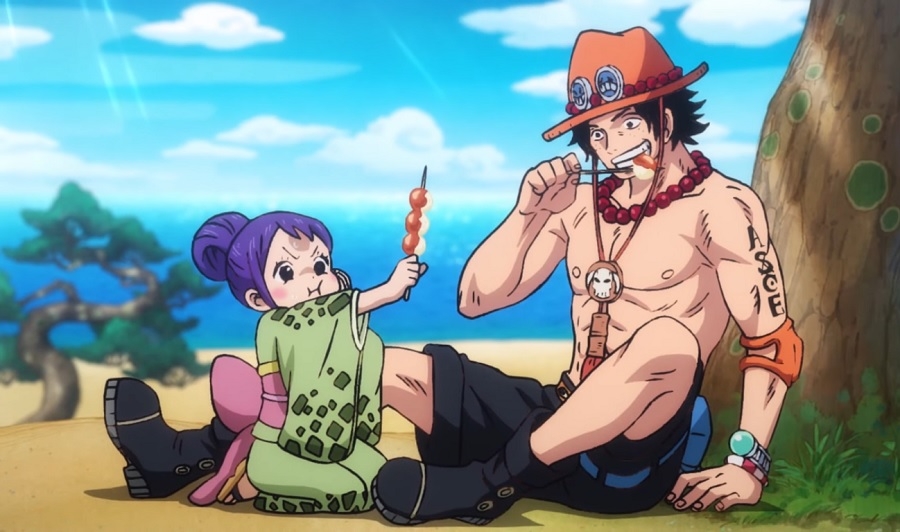 From an official clip of “One Piece” showing Ace and Tama meeting in Wano | Photo credit: Funimation / YouTube screenshot

In just a few pages, Eiichiro Oda managed to established Yamato as one of the most intriguing characters introduced in Wano arc. Fans likely have many questions about him since he revealed he knew Ace and that he holds Oden Kozuki’s journal, and hopefully some of them (if not all) get answered in “One Piece” chapter 985.

The early chapters of Wano Country Arc established that Ace had a great impact on the residents of Wano’s Amigasa Village, especially to Tama. But it now appears he also forged a relationship with Yamato during his time in Wano.

The last pages of chapter 984 focused on the conversation of Yamato and Luffy, where the former declared that he wants to be an ally of the pirate to open Wano’s borders. Yamato had also commented on Luffy’s power before stating that the Straw Hats captain reminds him of Portgas D. Ace. It would be a nice touch for “One Piece” chapter 985 to pick up from this revelation where Yamato could explain how he knew Ace and what kind of connection they had. This could further flesh out the characterization of Yamato as a potentially strong ally of Luffy in the long run.

Will Luffy be able to read Oden’s journal in ‘One Piece’ chapter 985?

Another interesting revelation from chapter 984 was that Yamato had been the de facto inheritor of Oden’s aspirations for Wano, which is to open its borders. Yamato learned about it after acquiring Oden’s journal following his death two decades ago. It is going to be interesting if the journal will be referenced again in “One Piece” chapter 985, and if Luffy would take an interest in reading it.

It can be recalled that during the flashbacks to Oden’s time as a pirate, he was repeatedly seen writing on that journal. It was implied that he had been documenting their adventure, including the time when they reached Laugh Tale as a member of the Roger Pirates. But this could also be the reason Luffy is unlikely to read it as it would be an anti-climactic way for Luffy to know what Oden and the others have discovered in Laugh Tale.

The downside right now is that the manga is currently having its usual break, so “One Piece” chapter 985 will not be released this week. Fans will have to wait until July 19 to see if any of these building questions about Yamato would be answered soon.