No, not again! A third straight La Niña is likely – here’s how you and your family can prepare

Not all marine fish eat plastics 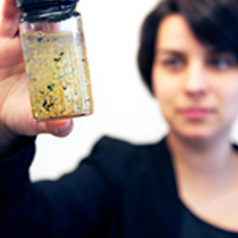 The Gulf Stream, which curves along the southern shore of Newfoundland, is saturated with plastics. Fish that feed from the surface waters, where plastics tend to accumulate, are in an ideal position to ingest plastics.

But what about the bigger fish that eat these fish, especially when we eat those predators?

In 2016, our laboratory collected 134 silver hake to check the rate at which they ate plastics. Since silver hake are predators that eat fish that feed from the surface waters where plastics tend to accumulate, we were prepared to see a lot of plastic.

To our surprise, when we opened their digestive tracts, we found zero plastics.

It turns out this is normal.

At first, we wondered if our results were a statistical anomaly. Most scientific literature reports ingestion rates well over our finding of zero. The ranges run from one per cent to 100 per cent, with an average of around 30 per cent.

When we took a closer look at other studies, we found that most of them averaged ingestion rates across all fish species.

But fish feeding habits are highly variable. Different species, ages and feeding grounds make some species more or less likely to ingest plastics than others. Some fish species eat from the middle of the water column, where there are fewer plastics, for example.

We untangled the results of these studies to see what the data said about each species.

We found that 41 per cent of all species studied do not ingest plastics! Silver hake and their zero per cent ingestion rates were not an anomaly at all.

No one loves a zero

Why didn’t we, a group of experts, know that there was a good chance we wouldn’t find plastics in a fish species?

There are two potential reasons that this kind of knowledge doesn’t circulate.

First, in science, it’s hard to get a zero published. The studies averaged the ingestion rate across species, obfuscating any zeros.

Erasing these zero results with broad-brush claims that equalize risk across all people, all landscapes or all fish overlooks crucial differences in practices, exposures and futures that do not apply equally to everyone and everything.

If we are invested in addressing the problems of plastic pollution, then our interventions must reflect these uneven distributions. For example, we might start with species that ingest the most plastics or that suffer most from plastics.

It is hard to address a problem like marine plastics without this kind of nuance.

Consider a parallel example. Predatory aquatic animals like lake trout or killer whales can accumulate chemicals such as PCBs. When we eat these fish, the chemicals have a greater effect on a growing fetus than an adult.

This is why fish consumption advisories are different if you are pregnant than if you are not.

Averaging harm and creating universal advisories put some people at more risk than others. Identifying differences is a basic principle of pollution work in both science and activism. It’s why knowing the prevalence of species that do not ingest plastics is significant to both public health and environmental justice work.

As it turns out, the dearth of zero ingestion rates isn’t the only thin number describing plastic pollution. A lot of the numbers that circulate about marine plastic pollution are speculative at best and unverifiable at worst.

For example, the oft-quoted statistic that “there will more plastic than fish in the oceans by 2050” is cinematic, but given the acute problems with estimating both the weight of global fish stocks for all species and all marine plastics in all environments, the number “is a useful illustration but it is not verifiable”, meaning that we can’t know if the number is correct or not.

Likewise, tests for estimating how long plastics take to degrade are “conducted at non-environmentally relevant conditions,” leaving the media to report ranges of 10 to 10,000 years.

Those figures identify time periods that are longer than plastics have been on the planet. (Plastic was invented about 150 years ago.) And the laboratory conditions that led to those those estimates don’t exist in nature.

Nor do we know how many plastics from land enter the oceans, or how many straws end up in the environment. Although we have some estimates, the exact numbers are proving to be a less than ideal source for describing the problem of plastic pollution.

The good news is that numbers don’t have to, and perhaps shouldn’t, be the main way we describe marine plastic pollution.

Counting plastics that are already in fish (or not) looks at the end of the pipe, instead of how plastics get into the pipe. Rather than asking “how much,” we can turn to the “why” and the “how.”

Instead of focusing on harm — the effects of plastics — we can look at violence — the cause of these potential harms by polluters.

When we first published our silver hake results, I received a lot of hate mail.

Social media posts accused me of working for the plastics industry, which I don’t. The public concern was that our zero result implied that there was no problem with pollution. Nothing could be farther from the truth.

But just because we see uneven harm (to the fish) does not mean there is uneven environmental violence. The plastic industry is still the only source of plastic waste, regardless of which species of fish tend to ingest plastics or not. Harm focuses only on effects, but violence captures causes of multiple and uneven effects.

Regardless of whether we find plastics in one fish species but not another, the pipeline moving plastics into waterways remains the same.

As a scientist, I want to warn against conflating “how much” harm with why harm occurs. I also want to highlight the “how” and “why” questions about violence over the “how much” question of harm.

Science is not in a position to say what is right or wrong, but only to quantify the occurrence of harm. It can say nothing about the “how,” the “why” or the “what now.” That is for us to consider.