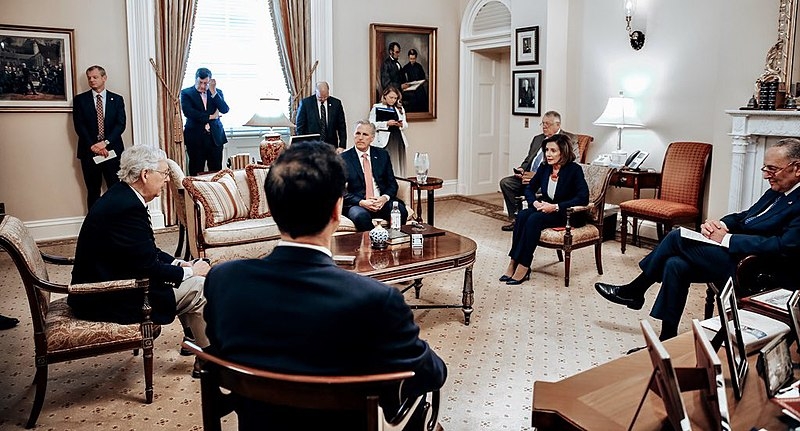 Following the January 6 riots at the Capitol and the elections of some Republican members of Congress raising questions, House Speaker Nancy Pelosi has called out the House Republican leader Kevin McCarthy. Pelosi blasted McCarthy in a damning statement, citing his failure to take action against GOP Congresswoman Marjorie Taylor Greene.

Pelosi’s office issued a scathing statement against McCarthy on Wednesday, even going as far as labeling the House GOP leader as “Q-CA,” the Q being a reference to conspiracy theory cite QAnon. The statement delivered a sharp criticism towards McCarthy for failing to take disciplinary action on Greene, who is known to have supported Qanon conspiracy theories. Greene has also received backlash from many in recent weeks due to her supposed harassment of her congressional colleagues. The statement also used remarks made by Senate Minority Whip John Thune that noted the growing divide within the Republican party.

The statement also notes that calls were made by several members of the GOP. Senate Minority leader Mitch McConnell, Republican Congressman Adam Kinzinger, the Republican Jewish Coalition, and many others all made calls to take action against Greene.

“After several conversations and literally running away from reporters, Minority Leader Kevin McCarthy (Q-CA) made clear that he is refusing to take action against conspiracy theorist Rep. Marjorie Taylor Greene,” the statement read. “As a result, the House will continue with a vote to strip Greene of her seat on the esteemed House Committee on Education & Labor and House Committee on Budget. McCarthy’s failure to lead his party effectively hands the keys over to Greene -- an anti-Semite, QAnon adherent, and 9/11 Truther.”

Previously, Pelosi said that the House will continue with the process that would let Democrats pass a COVID-19 relief bill with or without support from the GOP. Pelosi added that the House Democrats would move to pass a resolution which is the first step toward approving legislation via reconciliation. This would also allow Senate Democrats to approve of aid measures without the need for GOP votes.

While there is a hope for GOP support in the $1.9 trillion COVID-19 relief bill, Pelosi noted that the House Democrats will be prepared in case the amount fails to win Republican support.