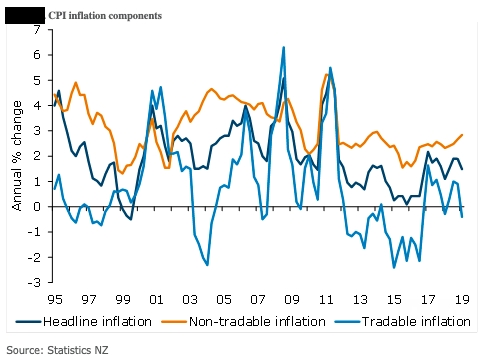 New Zealand’s CPI increased 0.1 percent q/q in Q1 2019, below the 0.2 percent q/q rise incorporated in the RBNZ’s February MPS, and below ANZ and market expectations. Annual inflation dipped to 1.5 percent y/y, from 1.9 percent.

However, the details of the release add to the case that a cut in the OCR is not a matter of urgency. The RBNZ will take some comfort from stronger domestic inflation, as expected (+1.1 percent q/q), with weakness concentrated in the relatively volatile and transitory tradable component (-1.3 percent q/q).

Today’s print for CPI inflation was slightly below the 0.2 percent q/q rise incorporated in the RBNZ’s February MPS. But the details of the print were broadly in line with their expectations, with volatility in tradable prices driving the RBNZ miss.

Looking forward, a lower NZD should start to feed more fully into tradable prices, and oil has already rallied 50 percent from the December low. This will result in a higher tradable inflation forecast in the May MPS, limiting any perceived risk of lower inflation expectations affecting pricing, ANZ Research reported.

Most importantly, non-tradable inflation was bang on the RBNZ’s expectation. While inflation is a lagging indicator, the RBNZ will take a degree of comfort from the fact that non-tradables is at its highest level in five years, with weakness concentrated in the volatile and transitory tradable component.

A large proportion of the quarterly pick-up in non-tradable inflation was due to regulated prices (tobacco and education). Core inflation measures tracked broadly sideways, continuing to stabilise following strength earlier in 2018.

Meanwhile, the annual 30 percent trimmed mean dipped a touch to sit at 1.9 percent. The weighted median was stable at 2.2 percent y/y, and inflation excluding food and energy remained at 1.5 percent. The focus now turns towards the RBNZ’s sectoral factor model for confirmation of the stable core inflation signal.