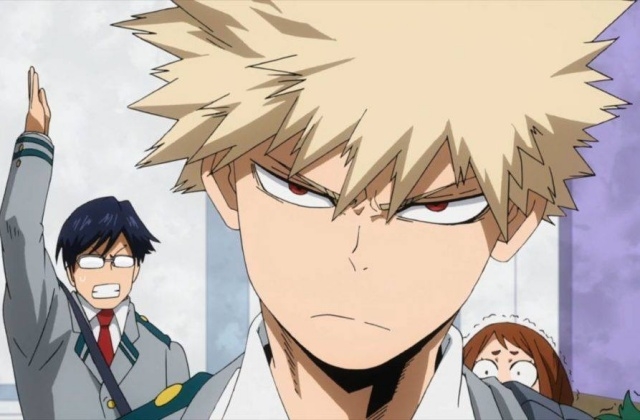 Previously on "My Hero Academia" chapter 277 simply titled “Who..?” Deku was saved by Gran Torino from Tomura’s attack. He knows that Deku will not be able to handle the powerful villain so he got him out before Shigaraki can touch the young hero.

Now, Gran Torino and Eraser Head faced Tomura Shiagaraki and he said that the villain’s strength is beyond the bounds of his understanding. Endeavor added that their opponent’s strength is the same as All Might so they have an idea how powerful he is.

Deku was so shocked by what he heard about Shingaraki’s powers. Endeavor then told Deku and Katsuki that in this situation, they need to act and something on their own. The no. hero also wants them to help out Eraser Head because as Rock Lock warned, he is in great danger if he ever comes close to Shigaraki.

Surely, Deku followed Endeavor’s order well and assisted Eraser Head when he suddenly appeared at the moment when Gran Torino and Eraser Head were fighting Shigaraki. The two were surprised when Deku suddenly showed up and pushed Tomura in the middle of their battle.

Tomura asked Deku to give him One For All but of course, he did not give in to this order. Deku is aware that all the heroes have teamed up to beat Shigaraki but still, Endeavor alone is still the most powerful hero. In fact, when he attacks Shigaraki, he dropped on the floor although he recovered and wants to get back at him.

Tomura will still battle with Deku, Endeavor and the rest in “My Hero Academia” chapter 278. Elsewhere, Gigantomachia is fighting with Mt. Lady at the Gunga Mountain Villa and he has with him, Himiko Toga, Spinner, Dabi, Spinner and Skeptic and they are likely to back up Tomura.

“My Hero Academia” chapter 278 will also feature Katsuki Bokugo’s powers as he unleashed it in an effort to help defeat Tomura. Meanwhile, this was originally set to be released on July 12 but there are rumors that the schedule was changed.

As posted on Weekly Shonen Jump’s Twitter page, the release date of “My Hero Academia” chapter 278 was moved from July 12 to July 19. However, it added that this may still change since this schedule may not be final yet.