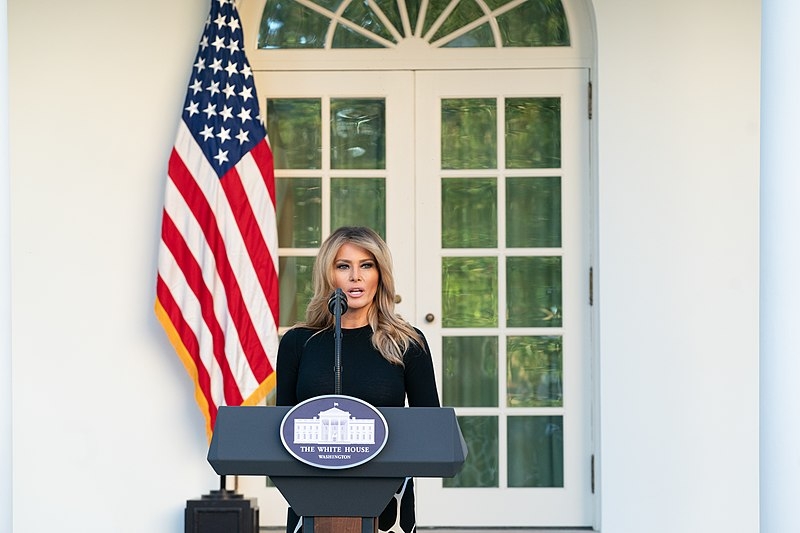 Outgoing first lady Melania Trump has often sent mixed messages regarding her approach to the COVID-19 guidelines by the CDC. Her recent event at a children’s hospital was no different as Melania violated the rules by taking her face mask off.

Melania recently visited the Children’s National Hospital this year, continuing the tradition of visiting every year during her time as first lady. She arrived at the atrium wearing a mask, but as she was about to read a story for the patients, she removed it. The hospital’s policy stated that everyone has to be wearing a mask while in the facility in order to slow down or prevent the spread of COVID-19 on the premises. The mask-wearing policy is enforced in all public areas and especially when around other people. No comment has been made regarding the decision to remove a mask nor was there any disclosure that she received special permission to remove the mask while reading to children.

The White House later released a statement on the first lady’s visit. It noted that the speakers at the event were not required to wear a mask as per the guidelines stated by the health guidance of the District of Columbia. The hospital’s spokeswoman Diana Troese cited the health guidelines of the state rather than of the hospital when pressed to clarify on the matter.

“In the case of today’s visit which was broadcast to our 325 patients, while the First Lady did remove her mask while she read a story, she was more than 12 feet away from others in our large atrium. All other people in that space were wearing masks. The remainder of her visit, she wore a mask,” said Troese.

Meanwhile, Melania’s step-daughter and White House adviser Ivanka Trump was criticized on Twitter following her comments on state lockdowns. Ivanka retweeted a video of a restaurant owner getting a citation from health inspectors as they did not adhere to the state guidelines of closing in the midst of a pandemic. Ms. Trump claimed that the lockdowns, which are implemented to slow down the spread of COVID-19, are not based on science.

Many users responded with her father’s approach to the pandemic in their criticism of her comments. Some cited that the country would not be in this state today had her father listened to the health experts rather than on whether there was election fraud.