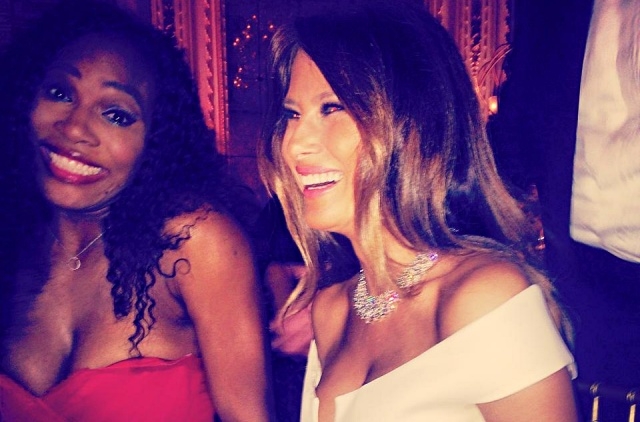 Melania Trump and President Donald Trump attracted all kinds of reactions when they appeared at a College Football game in New Orleans. The First Couple attended the playoff on Jan. 14, and the FLOTUS was shamed for her fashion choice.

Melania walked down the grassy field of a football stadium on Tuesday, and she was dressed in a navy shiny vinyl ensemble that was completed by black knee-high boots. Express notes that the First Lady wore a trench coat as she accompanied the POTUS to the sports event. However, she was heavily criticized for wearing such kind of outfit in the field.

The citizens bombarded social media, Twitter, in particular, to share what they think about Melania Trump’s look. Some asked why the FLOTUS wore a raincoat to the Superdome, while others say she could be one of the characters in the “Matrix” movie.

There are many funny and witty comments, but the posters of the messages are obviously annoyed. Another one said that Melania’s clothes are really a women’s space uniform!

Then again, most probably, the harshest comments were those that likened Donald Trump’s wife’s outfit to a trash bag. “Big deal, Melania was in a garbage bag. Her designer captured her essence,” a citizen wrote.

“Melania is representing the Trump Administration by wearing a garbage like bag dress,” another critic tweeted. “The worse kind of dress that I have ever seen. #MelaniaTrump in a Trash Bag.”

Melania Trump’s dress is not the only thing that sparked negative reactions that night. As Hollywood Life reported, the First Couple was caught on film, where the FLOTUS seemed to have forcibly taken out her hand from her husband’s grasp as they get ready for the national anthem.

Clips of the scene showed Donald Trump holding Melania’s hand when she suddenly tried to pull out her hand from his. People observed that the First Lady is not happy, although she smiles at the crowd from time to time.

“Melania hand snatch game is strong,” one viewer tweeted. “Once again, Melania jerks her hand away from Donald.”