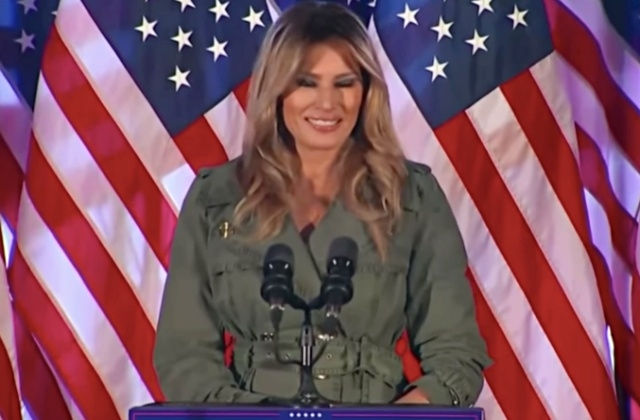 Melania Trump finally made her first solo campaign rally for her husband Donald Trump’s re-election in the upcoming presidential polls in the U.S. She appeared in Pennsylvania and delivered a speech that slammed the Democrats as well as Joe Biden.

The FLOTUS’ speech at the rally

In her first public outing since recovering from COVID-19, Melania Trump flew to Pennsylvania and spoke before hundreds of supporters. The venue was a converted barn that is usually used for wedding receptions, and she received such a warm welcome in her “Trump Make America Great Again” campaign.

The First Lady spoke about the coronavirus issue and sharply attacked the Dems. She also dropped some lines against Donald Trump’s rival in the presidential race, Joe Biden, who she depicted as someone who is "wasting the taxpayers’ dollars on a sham impeachment."

"Now he suggests that he could have done a better job,” CNN News quoted the First Lady as saying in her speech. “Well, the American people can look at Joe Biden's 36 years in Congress and eight years in the vice presidency and determine whether they think he'll finally be able to get something done for the American people."

She added that Biden’s policies and socialist agenda will only serve to slaughter the U.S. and all that has been built in the past four years. Thus, Melania Trump told the people, “We must keep Donald in the White House so he can finish what he’s started and our country can continue to flourish.”

As for the Democrats, Melania Trump said that they care more about expelling the elected president. She also accused them of working to destroy America’s traditional values with the help of the media. While they are trying hard to remove Donald Trump, the FLOTUS said that her husband was working hard for the people.

"I watched Donald continue to work hard to keep people informed and calm, to protect our economy, and make hard and unpopular decisions to do all he could to keep us all safe,” she said. “This sham was led by the opposition, and their display of hatred is on display to this day."

Dems react to Melania’s Melania’s words during the campaign

AP News reported that Nancy Patton Mills, the Pennsylvania Democratic chairwoman, mocked the First Lady’s campaign as a response. She said that Melania Trump would not even have an answer to Pennsylvania’s increasing unemployment rate as well as to why the current administration has “stopped trying to combat a virus that’s killed 8,700 Pennsylvanians and counting.”

Joe Biden’s camp has not commented on Melania Trump’s campaign speech yet. Meanwhile, the FLOTUS’ appearance in the rally comes just one week before the election in America. She attended the event with the former White House counselor Kellyanne Conway.