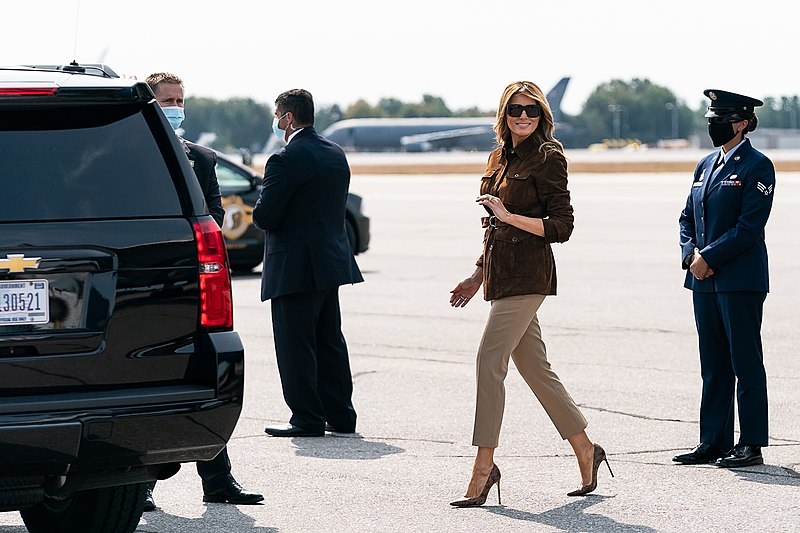 Compared to her predecessors, Melania Trump is the more relatively low-profile of the recent first ladies. The latest Gallup poll revealed that the first lady’s favorability rating among Americans has not changed.

CNN reports that Melania’s favorability rating remains unchanged at 47 percent, according to a new Gallup poll. However, following her speech for the Republican Convention at the White House Rose Garden, Melania’s unfavorability rating climbed by seven percentage points at 43 percent. Mrs. Trump has often stayed out of the limelight for much of the year due to the pandemic and guidelines set by health experts, nor has she actively campaigned for her husband Donald Trump over the past several months.

Even during the 2016 elections, Melania did not campaign much on behalf of her husband as she preferred to focus on raising their son Barron Trump. Spouses of candidates are usually thought of as assets in political campaigns, as they are able to humanize the candidate or incumbent, giving the public a look at how their spouses are when not engaging in politics.

Compared to Melania, Joe Biden’s wife Jill Biden, has actively campaigned for her husband at events, whether in-person or virtual. In the same poll, Jill leads Melania by two percentage points in favorability at 49 percent, while her unfavorability rating is low at 27 percent.

However, according to the former campaign adviser to the campaigns of Mitt Romney and George W. Bush, Kevin Madden, how involved Melania and Jill may get into the campaigns of their husbands may not hold a lot of weight. Madden explained that the current presidential race is being shaped by the pandemic, the economic crisis, as well as social unrest currently happening in the country.

Meanwhile, Melania, along with her step children Don Jr., Eric Trump, and Tiffany Trump, took to Twitter recently to express their condolences upon news of the passing of Justice Ruth Bader Ginsburg.

“Justice’s Ruth Bader Ginsburg’s passing is an immense loss. Her tenacity & strength were matched by her intellect & compassion, & her spirit will live on in all she has inspired. My prayers are with her family & all who loved her. #RIPRBG,” tweeted the first lady.

Donald Trump Jr. shared a video clip of his father having only heard of Ginsburg’s passing at an event. “RIP Justice Ginsburg. Agree with her or not, she was a true trailblazer and fighter until the end,” tweeted Don Jr.