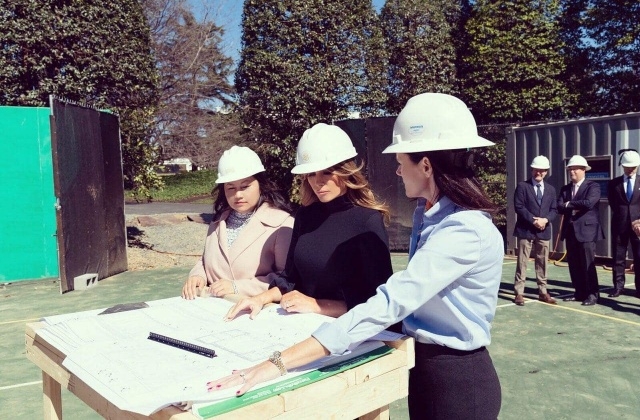 Melania Trump spearheaded the renovation of the Rose Garden and although she was criticized for this move, the works proceeded as planned. The lawn was closed for almost five weeks and so much is expected for the result however, it was off-limits again after issues arose.

The iconic Rose Garden in the White House was closed off again for much-needed repairs just three weeks after it was unveiled by Melania Trump. A source told CNN that the garden has issues with water drainage and other minor complications after the area was updated.

The reveal of the renovated Rose Garden

On Aug. 22, Melania Trump opened the garden again after weeks of work. The overhaul was completed just in time for her to speak at the Republican National Convention as Donald Trump is seeking his second term as president of the United States.

After the construction, the Rose Garden was described as featuring Melania Trump’s personal tastes. The area was said to be well-structured, has clean lines and designed with neutral colors. The FLOTUS based the overall style of the garden in the original layout that was designed by Bunny Mellon upon the request of President John F. Kennedy in 1962.

Features of the garden

In any case, the East Wing refused to fund the renovations for the Rose Garden so the expenses were paid for by private donations. Aside from improving the aesthetics of the area, facilities were also upgraded for TV appearances, drainage was overhauled and new walkways were installed as well.

Many events in the White House usually take place in the Rose Garden so there are many people who also agree that it needed to be renovated and improved. When Melania Trump unveiled it, she also mentioned in her speech about the importance of this area.

“Gardens are symbols of growth and hope,” the FLOTUS said. “We celebrate this garden in the hope that future generations will not only enjoy but also draw inspiration and strength from this space where so much of our history has been shared.”

Criticisms over the renovation

As mentioned earlier, many praised the improvements in the Rose Garden but there were also people who criticized Melania Trump. One reason was the removal of the crab apple trees that were there since the time of the Kennedy's.

Then again, it should be noted that the trees were only moved to a greenhouse and will be replanted in other parts of the White House lawn. Before the renovation, people were also telling her that she doesn’t need to do it and asked her to just focus on more important things like funding projects for COVID.