McDonald's collaboration with BTS; Here’s how much the fast-food chain bet on the Kpop stars 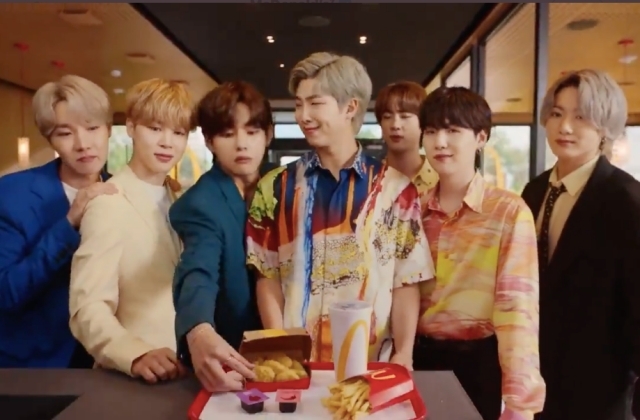 McDonald's launched the BTS meal last week as part of its celebrity menu collaborations. This time, the world-famous fast-food chain chose the biggest band in the world, and many are wondering how much the company may have spent to hire the South Korean boy group.

It was previously reported BTS is one of the most expensive brand endorsers these days, and McDonald’s hired them. And it could even be more costly since the endorsement deal is not just in the local market but worldwide.

How much did McDonald’s bet for BTS’ collaboration deal?

The Korea Times reported that industry insiders said that just for domestic or local deals, BTS is paid between ₩3 billion or $2.69 million and ₩5 billion or $4.48 million. The McDonald’s promotion with the seven-member band is targeting 50 countries, so it was estimated that they will be getting around ₩10 billion or almost $9 million or more.

But then again, despite the hefty fee to hire BTS as its latest artist for its celebrity menu collaboration, the company is not losing a penny because it was proven that McDonald’s made the right decision to feature BTS. In fact, it was said that its team up with the most popular band in the world is paying off due to the group’s solid fan base around the planet.

Having BTS is also the best because it has helped improve McDonald’s image that has been tainted lately by quality and management issues. The partnership is definitely a huge plus for the burger joint, and it means that it spent its money well for the endorsement deal. It was reported that the fast-food giant’s goal is to promote its brand and draw in BTS’ 34 million fans worldwide.

"We are delighted to introduce McDonald's new menu item in collaboration with BTS, who are big fans of our food,” a McDonald’s official said during the launch of BTS Meal. “We hope this collaboration gives us an opportunity to connect to BTS's fans.”

The BTS meal is available in many countries, and in the U.S., it will be in stores until June 20 only. It is already available in South Korea, and by June, the number of regions will reach 50, and there is a schedule for the launch and end of the promo.

USA Today reported that in the U.S., McDonald’s would also debut a new TV commercial that features BTS’ newest English song, "Butter." Through the fast-food’s app, customers will also be treated to never-before-seen digital surprises each week. Lastly, McDonald’s BTS meal merchandise such as bathrobes and socks will also be sold in restaurants as well as Weverse Shop.