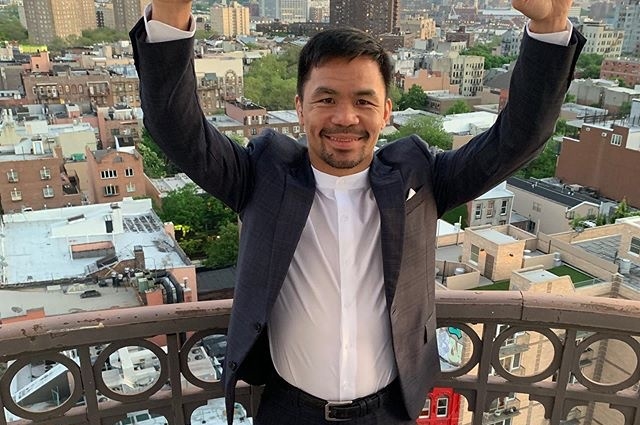 Manny Pacquiao is set to fight Keith Thurman on July 20 at the MGM Grand Arena. The Filipino boxer is aiming to unseat the latter and take his Super Welterweight World Championship belt. Pacman has the Regular Welterweight World Champion belt, and if he succeeds and beat his American opponent, he will achieve a new milestone in his career when he seals his ninth boxing title in the WBA.

Philippine Star reported that Pacquaio had ended his training in Manila and flew to Los Angeles to resume his intense training routine. This is the last phase, so he has been working hard to be in his best condition for the upcoming fight.

In any case, while training in Manila, Manny Pacquaio was made to box with the Australian boxing champ Tim Tszyu. He is a pro-boxer and remained unbeaten in the light middleweight division with 13 wins and 10 knockouts. He is also a super middleweight champ in his home country’s national boxing federation.

After the sparring session, Tszyu is convinced that Pacquaio will beat Keith Thurman. “I think Manny will catch him (Thurman),” Tszyu said as per Rappler.

The Aussie fighter and Pacquaio sparred for five rounds, and within that time, the former is impressed with the 40-year-old’s speed and power. He has solid punches that can overpower Thurman in the actual bout, so Tszyu confidently predicts Pacman’s win next month.

Manny Pacquiao is fighting Keith Thurman who is undefeated and boast of 29 wins, 22 KO’s. Meanwhile, prior to the fight, some promising boxer will take the ring beginning July 21 as a prelude to one of this year’s major fights.

As shared on CBS Sports, the boxing schedule highlighted by the Manny Pacquiao-Keith Thurman face-off include Andrew Cancio vs. Alberto Machado, Jorge Cota vs. Jermell Charlo, Jermall Charlo vs. Brandon Adams, Demetrius Andrade vs. Maciej Sulecki and Teofimo Lopez Jr. vs. Masayoshi Nakatani. They will vie in different weight categories in locations from Las Vegas to Maryland.