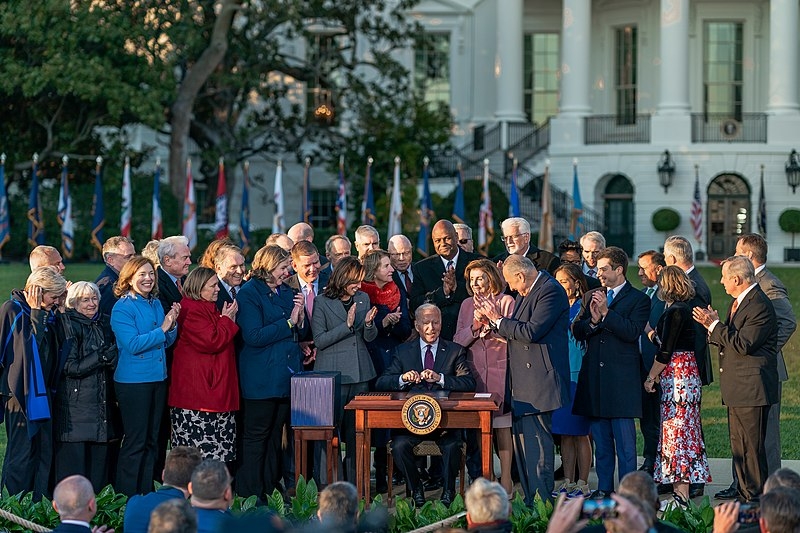 The Biden administration is set to promote the passage of the bipartisan infrastructure bill following its signing into law this week. Vice President Kamala Harris touted the benefits of the infrastructure bill in Wisconsin, stressing the importance of each provision.

Harris promoted the benefits of the $1 trillion bipartisan infrastructure bill that would have provisions for roads, bridges, airports, as well as clean drinking water and expanded access to high-speed internet. Speaking with the Milwaukee Journal Sentinel, Harris highlighted the importance of access to high-speed internet in the bill. The state is set to receive around $100 million for broadband internet coverage, which could benefit around 318,000 residents.

“We are really focused on what we need to do around issues like internet and accessible and affordable high-speed internet. This is a big issue, I know, for the people in Milwaukee and again around the country,” said the vice president.

“Those who have access often deal with the challenge of affordability. And so we intentionally designed the infrastructure acct in a way that recognizes that this is a basic issue of infrastructure,” Harris added.

Around 1.2 million Wisconsin residents will be eligible for what Harris revealed as the “affordability connectivity benefit.” This means people who qualify will receive $30 vouchers a month in order to access high-speed internet in both rural and urban areas.

Harris also highlighted the importance of lead poisoning prevention through lead paint or lead pipes. The state is set to receive around $841 million spaced out in five years to improve its water quality.

In other related news, Montel Williams criticized Fox News personality Tucker Carlson for his comments regarding the brief relationship he had with the vice president almost 20 years ago. Carlson also noted the history between Williams and Harris back in January, saying that moving forward, Harris would be referred to as Williams’ ex-girlfriend.

Speaking with Mediaite, Williams said he does not know why Carlson is interested in their previous relationship. Williams went on to take a swipe at Carlson, saying that he succeeded to be where he is today, suggesting that Carlson likely got his position due to his stepmother, Patricia Swanson, the heiress of the famed frozen food company.