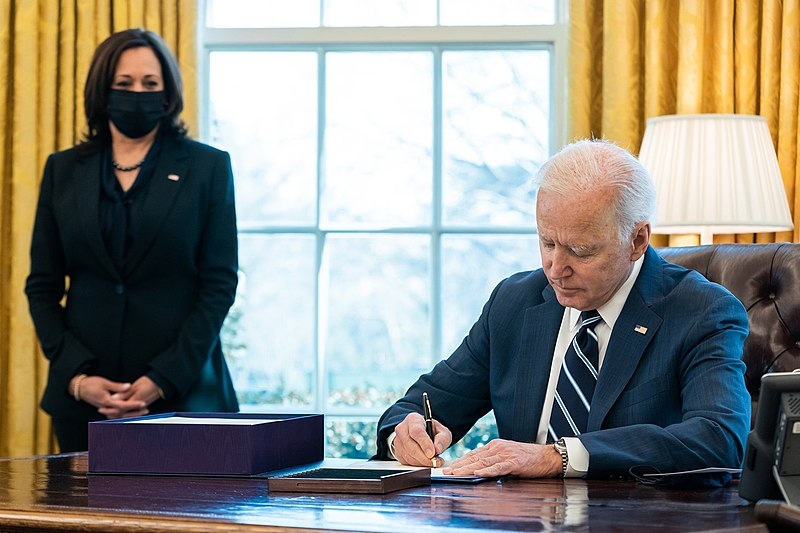 This week marks a big achievement by the Biden administration halfway through Joe Biden’s first 100 days in office as the new president. Biden officially signed into law his sweeping $1.9 trillion COVID-19 relief package.

Biden signed the bill into law at the White House Oval Office Thursday, a day earlier than expected, following the House’s swift passage of the final version of the bill. The House’s second approval of the bill also comes several days after the Senate passed the bill. The passage was done on party lines as both House and Senate Democrats moved the sweeping relief package forward without a single vote of support from their Republican counterparts. This would mark the first significant legislative achievement by Biden and his administration.

Biden did not take questions from the media that were present during the signing. However, he made a primetime address to the public hours later, marking the first anniversary of the COVID-19 shutdowns in the country. Vice President Kamala Harris was also present at the signing of the bill.

“In the weeks that this bill has been discussed and debated, it is clear that an overwhelming percentage of the American people -- have made it clear they strongly support the American Rescue Plan,” said Biden in his remarks prior to the signing. “Their voices were heard.”

The $1.9 trillion package includes $1400 stimulus checks to American households, increased funding for vaccine distribution efforts, funding to help schools reopen safely, as well as extended unemployment benefits until September, among many other aspects. Despite the signing taking place a day earlier than expected, White House Chief of Staff Ron Klain tweeted that the administration would still hold a celebration of the bill’s passage with congressional leaders on Friday.

During his primetime address, Biden discussed the administration’s response to the pandemic so far. Biden expressed optimism that the country can somewhat go back to normal by July in time for Independence Day. In order to be able to reach the goal of going back to some kind of normal by that time, Biden recently directed all the states to make all American adults eligible for COVID-19 vaccinations by May 1.