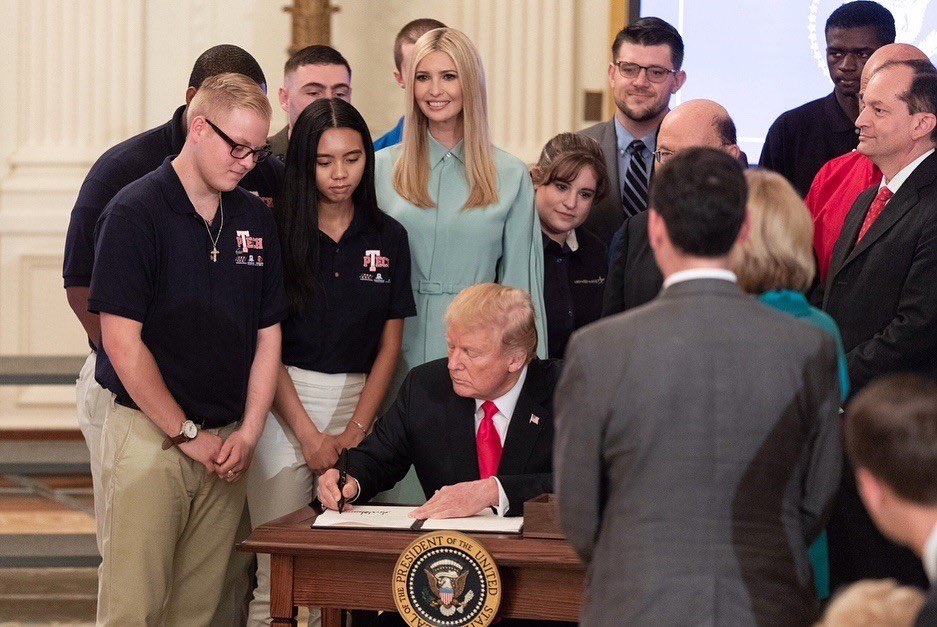 As of today, Ivanka Trump leaves her post as White House adviser to make way for the Biden administration. The eldest Trump daughter was seen getting emotional as she watched her father Donald Trump make his final address as president.

The Trumps departed from the White House in the early hours of the inauguration. As expected, none of the family were present at the ceremony to witness Joe Biden’s swearing-in as the new president. Ivanka and her siblings, Donald Trump Jr., Eric Trump, and step-sister Tiffany Trump were at Joint Base Andrews where her father would board Air Force One for the final time as president. With her husband, Jared Kushner, and their three children, Ivanka watched her father make his final speech as the country’s president, getting emotional at his remarks. Her siblings were also seen to be emotional as the address was televised.

With the exception of her children, she was sans face mask, as were the rest of the crowd present. Ivanka’s siblings were with their respective partners; Kimberly Guilfoyle, Lara Trump, and Michael Boulos. With a crowd of supporters and allies, Trump expressed his gratitude towards having served as Commander-in-Chief, while also wishing the incoming administration well without naming Biden specifically. Trump also touted his administration’s achievements and the votes he received in the election but no longer mentioned his false claims of election fraud that have been widely debunked.

Trump, his wife, now-former first lady Melania Trump, and their son Barron Trump are expected to relocate to Florida permanently.

Compared to the rest of her family, Ivanka went forward to congratulate Biden and vice president Kamala Harris in her statement that also served as a farewell to her duty as White House adviser. Her statement was released hours prior to Biden taking office at the White House. It would also appear to be the first time Ms. Trump acknowledged Biden to be the new president.

“May God give wisdom, courage, and strength to President-elect Joseph R. Biden, Dr. Jill Biden, Vice President-elect Kamala D. Harris, Mr. Douglas Emhoff, and all of the leaders, judges, officers, and officials who devote themselves to the service of the public. As Americans, we all pray for their success,” wrote Ms. Trump.