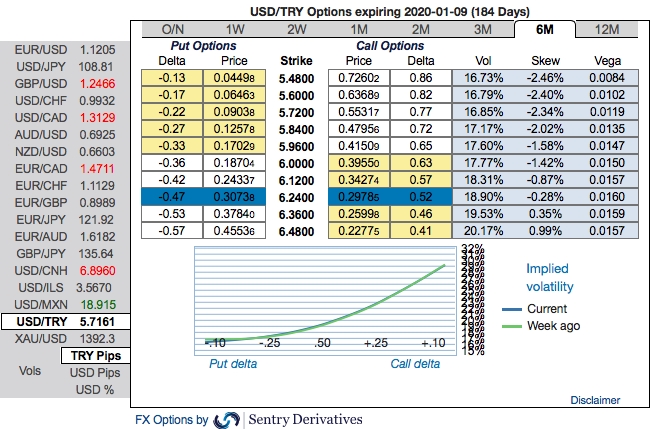 Following the news of CBT chief Murat Cetinkaya being removed by Presidential decree, yesterday we revised forecasts for the Turkish economy and the lira sharply lower. Analysts now foresee USDTRY at 7.75 by Q1 2020. There is no probability that any straightforward path ahead for a country which does not have a credible inflation-targeting central bank.

We fear that Turkish assets will go through significant turbulence while CBT prepares to cut rates and an unconventional monetary policy experiment is played out.

In addition, the comments by the US President during his recent meeting with his Turkish counterpart Recep Tayyip Erdogan suggest that the whole row about the missile system the Turkish armed forces are going to be buying from Russia has been solved. The sanctions the US administration had threatened to impose had constituted a major sword of Damocles for the Turkish economy and the Turkish lira. One thing has become clear from our experience with the Iranian sanctions: for fear of secondary sanctions everyone sticks to the US sanction policy - regardless of domestic legal situations. This risk has now been overcome - or so it would seem. It, therefore, makes sense that the lira was able to appreciate this morning. USDTRY now trades below 5.70, EURTRY below 6.45 levels.

Trade tips: Contemplating prevailing price dips, we reckon that it is the ideal time for deploying longs with a better entry level, on hedging grounds 3m USDTRY debit call spreads are advocated with a view to arresting upside risks. Initiated 3m 5.50/6.48 call spreads at net debit. Thereby, one achieves hedging objective as the deep in the money call option with a very strong delta will move in tandem with the underlying spikes.

The rationale for the trading: Please observe that the above technical chart is also clearly indicating the further upside risks.

It seems that hedgers of TRY are positioned for the upside risks on the above fundamental factors. The positively skewed IVs of 6m tenors are bidding for OTM calls strikes up to 6.48 levels.

IVs of this underlying pair is also on the higher side, trending highest among the G20 FX space. Call options with a higher IVs cost more, because, increasing IV is conducive for the option holder, just for an intuition that the higher likelihood of the market ‘swinging’ in holder’s favor. Please also be noted short-dated options are less sensitive to IV, while long-dated are more sensitive. Courtesy: Sentry & Commerzbank