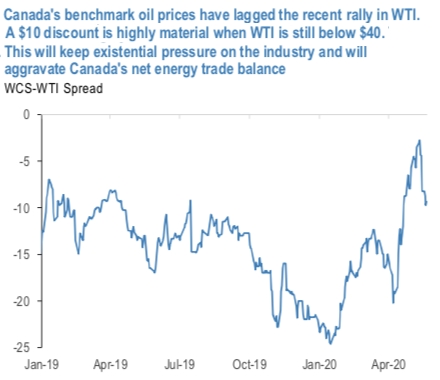 USDCAD remains narrowly range-bound in the 1.3850- 1.4150 area and on net is about 1% below levels one month ago. This is only a modest bounce in the context of the 25% rebound in global oil benchmarks. Once again, Canada's energy sector idiosyncrasies are starting to manifest – the discount of WCS, the benchmark for Canada’s oil sands producers (2/3rd or Canadian production) has once again widened to near $10 (refer above chart).

Thus while WTI has normalized in the $30s, WCS remains anchored in the low to mid-$20s. This will remain problematic given Canada’s oil sands are among the highest-cost producers in the world; indeed, we already understand pipeline throughput to have fallen 15% in April alone, with up to 20-30% of total crude production ultimately slated to come offline before consolidation in the sector is complete. This will likely continue to weigh on CAD's beta to oil, as well of course the macro channels of terms of trade, investment and labor markets.

Energy will also remain a liability to Canada’s already- poor BoP backdrop. Even at $30 per barrel, Canada’s net trade balance is liable to drop considerably. This will weigh on a current account that, since 2019, has been financed precariously by short-term currency and deposits (which have shown to be rate-sensitive). Lower oil thus portends a worsening of an already considerable external vulnerability. For this reason, short CAD remains a high- conviction medium-term view for us. Admittedly, CAD has been a benefactor of improving global risk sentiment and recent dollar softness, but CAD should ultimately be a laggard in the G10 FX complex as longer-term factors continually exert downward pressure on the currency.

At USDCAD spot reference: 1.3755 levels (while articulating), boundary options strategy is advocated using upper strikes at 1.3875 and lower strikes at 1.36 levels. One can achieve certain yields as long as the underlying spot FX remains between these two strikes on the expiration.

Alternatively, we recommend directional hedges that comprised of longs in USDCAD futures contracts of July’20 delivery, simultaneously, shorts in futures of June’20 delivery for arresting bullish risks in the major trend. The short leg is likely to hedge potential slumps in the short run. Thereby, one could be able to directionally position in their FX exposures on hedging grounds. Courtesy: JPM