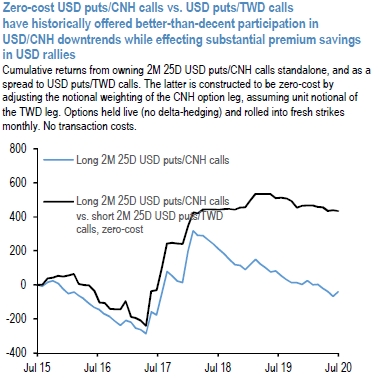 Such projection is by no means aggressive and does indeed consider downside risks in EUR-USD, for example due to the continuation of the US-Chinese conflict that had a positive effect on USD for a long time. This is because demand for US goods and services is artificially increased by tariffs on imports from China, or as currently preferred by the US administration, as the result of a ban on Chinese software from the US which leads to a mixture of higher US prices and a stronger dollar. However, the market now seems to increasingly also concentrate on the negative effects for the US economy, which is why the US currency was hardly able to benefit from the recent rise in tensions.

On the back of a somewhat tightened policy tone, China's onshore bond yields surged over the past few days, with the benchmark 10-year yield breaching above the key level of 3% this morning. However, a higher yield seems to have failed CNY exchange rates. CNY exchange rates got a negative hit this morning after President Trump singed an executive order to address the threat posted by a Chinese own tech firm.

As a RV construct, long CNH options vs. short TWD options in any form is on the right side of the beta divide in Asian FX. For Asian currency investors, the salutary lesson of the past three years since the US – China trade conflict erupted is that there is no higher beta RMB proxy in the region than the RMB itself, not even traditional cyclically sensitive candidates like KRW whose risk elasticity has declined markedly in recent times. USDTWD options, particularly USD calls/TWD puts, have been popularly deployed as a lower beta but better yielding North Asian proxy for CNY weakness, but for the most part, aggressive spot moves have been frustrated in both directions by a mix of fundamentally positive currency macro (large NIIP, large C/A surplus, lifer and exporter hedging) on the upside and CBC smoothing on the downside. The latter has become particularly notable of late, in the context of the TWD NEER persistently hugging the upper-end of the so-called dynamic stability corridor (36-month MA +/- 5%) that the central bank closely monitors as a gauge of currency valuation, and has shrunk close-to-close 1-mo realized vol of TWD 1M NDFs from 5.0 in late May to 2.0 currently, vs. 3.3 for CNH on a similar measure. In this context, it is interesting that the USDCNH vs. USDTWD ATM vol spread in sub-3M tenors had shrunk to almost zero earlier in the week before the tit-for-tat consulate closure brouhaha gave front-end CNH vols a sharp lift. Unlike the heavily managed TWD, CNH is currently a currency on the move, and is perhaps

the most heavily owned Asian FX by the spec community in anticipation of growth / rates / BoP-driven fundamentally justified currency strength.

Owning USDCNH puts financed with USDTWD puts is a premium efficient way of positioning for conditional USD weakness – conditional because both options stand to expire worthless and leave no P/L trace if constructed in zero-cost format should an intensification of US – China tensions lead to an abrupt and material weakening of the Asian FX complex.

The above chart shows that such option spreads have an impressive track record of participating in USD weakness in recent years without commensurate exposure disruptive USD strength. Despite the sharp spike in implied vols, current pricing on a USD put/CNH call vs. USD put/TWD call option spread still remains attractive given the pronounced forward point carry differential between the two currencies (1M FX implied yield of CNH + 2.4%, TWD -4.2%) that permits asymmetric strike locations on the two legs (e.g. 3M 1% OTMS USD/CNH puts can be costlessly financed with 3M 2% OTMS USDTWD puts). And from the standpoint of a directional RV, the disturbance of relative vol optimality on account of the late-week jump in CNH vol is more than compensated for by the more attractive re-entry location on spot.