FxWirePro: Spotlight On EUR/CHF Short Trade Ahead of ECB

FxWirePro: Antipodeans Trading and Hedging Possibilities Ahead of RBNZ 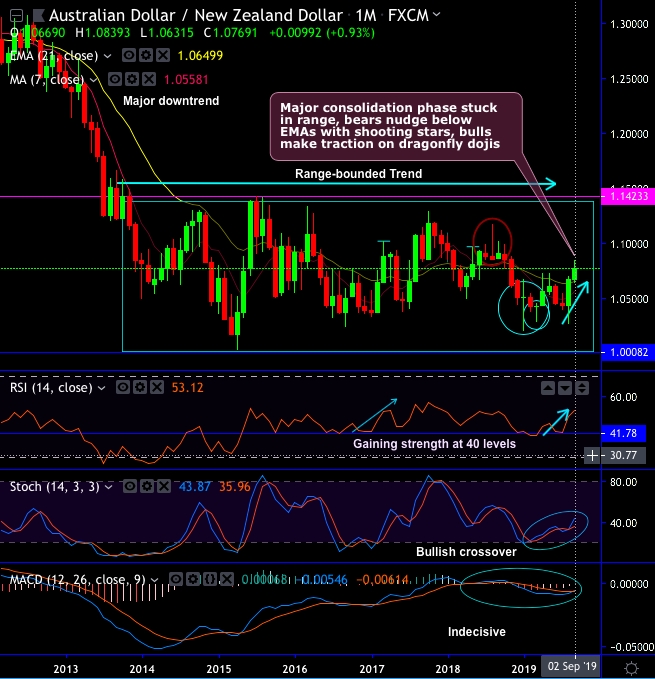 Central bank meetings have prompted tactical changes in the recommended portfolio, but don’t warrant strategic re-thinks. RBNZ is scheduled for their monetary policy this week, while the global growth remains the primary driver of our views; flash PMIs and trade talks will be key.

AUDNZD is one pair, that has been oscillating between 1.1425 and 1.0025 levels from last 5 years. The upswings, from the last couple of days, are targeting 1.0685 levels with potential for even higher. The main driving forces at this juncture, is the reversal of NZ-AU yield spreads following the RBNZ’s shift to an easing bias (while the RBA remains neutral). AU economic data has been strong too (retail sales, trade). There’s little major economic news out this week, apart from consumer confidence.

AUDNZD Strangle Shorts: Contemplating the major trend that has been range-bounded (oscillating between 1.1425 and 1.0025 levels), it is wise to deploy (0.5%) out-of-the-money call and (0.5%) out-of-the-money put options of 1m tenor. The strategy can be executed at the net credit and certain yields would be derived in the form of the initial premium received as long as the underlying spot FX remains between OTM strikes on the expiration.

3-Way Straddles Versus ITM Puts: Keeping non-directional movements in the underlying spot FX into the consideration (refer above chart), 3-way straddles are advocated, the strategy comprises of at the money +0.51 delta call, at the money -0.49 delta put options and short in the money put options of narrowed expiry with a view of arresting potential FX risks on either side but capitalizing on minor upswings in the near-terms. Hence, on hedging grounds, buy 2m ATM delta puts and ATM delta call of similar tenor and short (1%) in the money put options of 1w are advocated.

Directional Hedge: Alternatively, on hedging grounds, we advocated initiating longs in AUDNZD futures contracts of September’19 delivery as further upside risks are foreseen and simultaneously, shorts in futures of November’19 delivery for the major downtrend. We now wish to rollover longs for October month.

Thereby, one can directionally position in their FX exposures. The directional implementation of the same trading theme by further allow for a correlation-induced discount in the options trading also if you choose strikes appropriately. Courtesy: JPM & Westpac