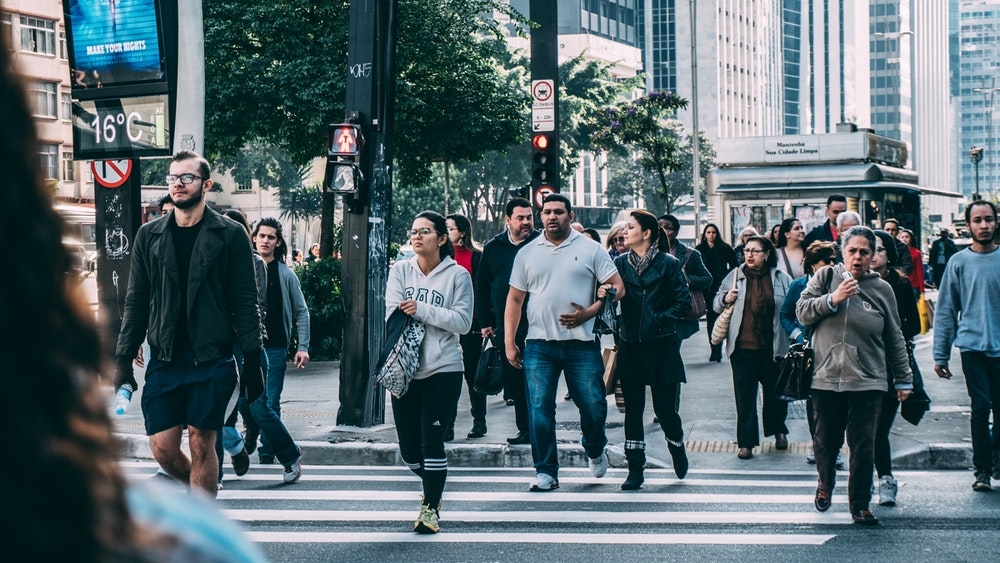 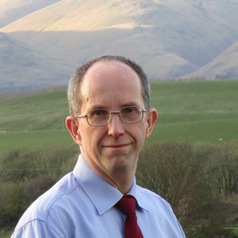 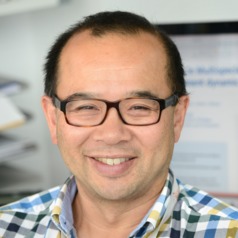 The COVID-19 pandemic has already caused several thousand deaths, widespread health problems, massive anxiety and economic losses. Most people are concerned with what happens day by day as we wait for control measures to work.

But we should also be concerned about whether or not we will be living with the virus for a long time. Will we be able to eradicate COVID-19, as we did with Sars? Or will we need to learn to live with it like we do with the common cold? We have been experiencing epidemics and pandemics for centuries, so there are lessons we can draw from these examples.

To understand what happens to the virus in the long term, we need to look at how large epidemics work, starting with “patient zero”. If there is significant human-to-human transmission, the virus begins to spread, causing a fast increase in the number of cases (illustrated in the figure below). At the same time, those who overcome the disease and develop resistance are henceforth immune, at least for a while. The people who are newly infected will increasingly have contact with these immune people, rather than with those who have not yet had the disease. This process effectively protects the susceptible population and causes the initial fast growth to slow and eventually stop. 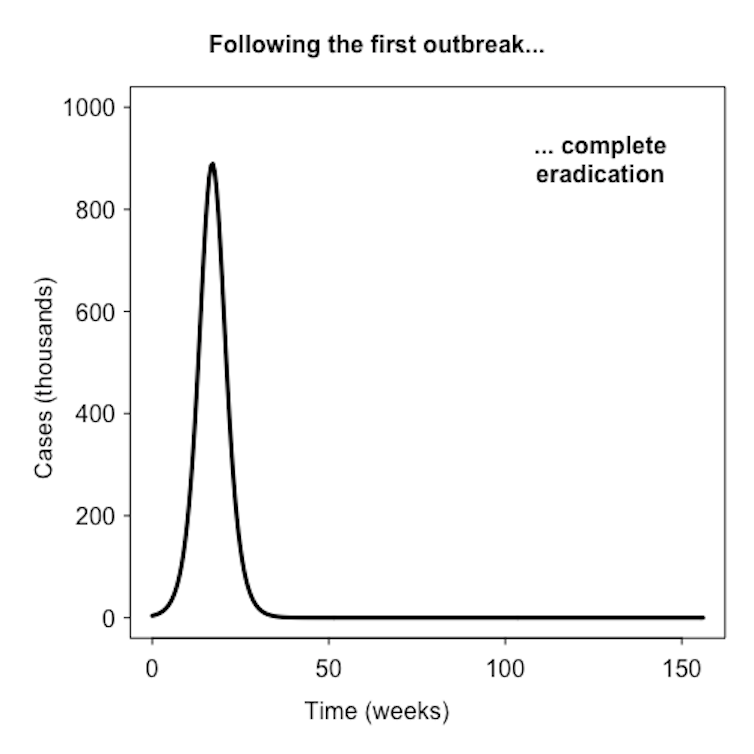 An example of a disease progress curve for a long-term scenario following the initial outbreak: quick eradication. The number of cases and duration of the epidemic for illustrative purpose only.

The level of herd immunity needed to stop the spread depends on both the number of contacts an average person has and how infectious the disease is. If highly contagious, this can be as much as 95%. This protection can be achieved by a combination of reducing infectiousness through immunity, either natural or acquired, or vaccination, or by reducing transmission. Quarantine and mass restrictions on travel have proved effective, as shown in China, where the number of COVID-19 infections outside of Hubei province, where it started, have been few.

What happens next depends on the disease characteristics and human actions. The 1918 flu virus did not persist after the early 1920s probably because enough people became immune to it. However, many pathogens are difficult to eradicate globally, although local success is possible. For example,foot-and-mouth disease, which affects sheep and livestock, survives in many countries. The outbreak in the UK in 2001 was reduced to local islands of infection by an animal movement ban and then eradicated by massive culling. But it took a long time and high costs to finally bring it to an end (figure below). Like many countries, the UK now has strict rules of animal imports, aimed at stopping the disease from arriving again. 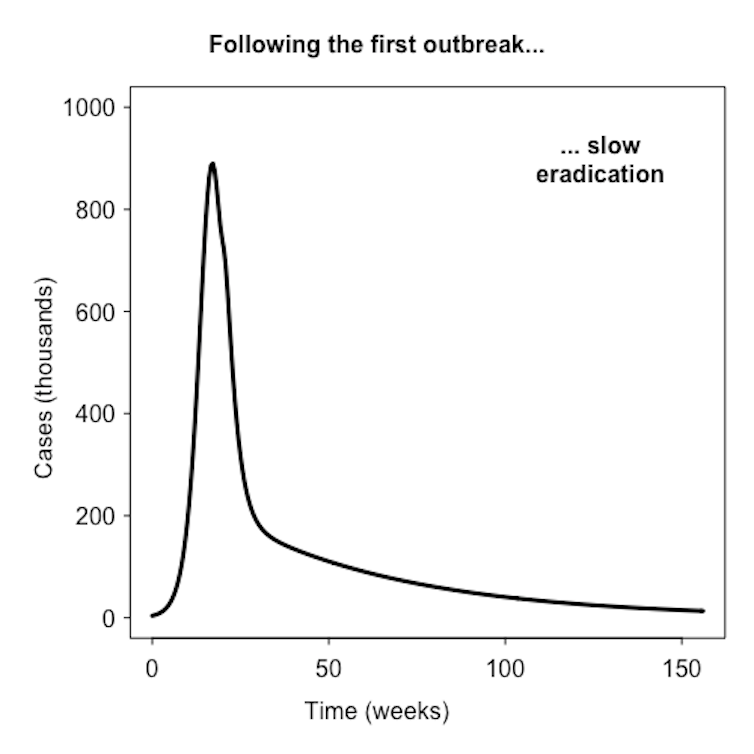 An example of a disease progress curve for a long-term scenario following the initial outbreak: slow eradication. The number of cases and duration of the epidemic for illustrative purpose only.

It is possible that we will eradicate COVID-19 in selected countries or regions, but not necessarily worldwide. Although there are hopes that a vaccine will be successful within the next year, this is not certain. If it happens, very stringent travel checks may need to be imposed for at least a substantial time – such a restriction, added on to concerns of the impact of air travel on climate change, may mean that the tourism industry may never recover.

Some diseases prove impossible to eradicate even in the long term and will persist following the first outbreak (figure below). Diseases originating in Europe and Africa were brought to North America for the first time in the late 1400s and early 1500s. Encountering a population with little immunity, smallpox and other diseases spread rapidly causing the collapse of indigenous communities. Subsequent outbreaks were lower, but smallpox and measles persisted until the 20th century. 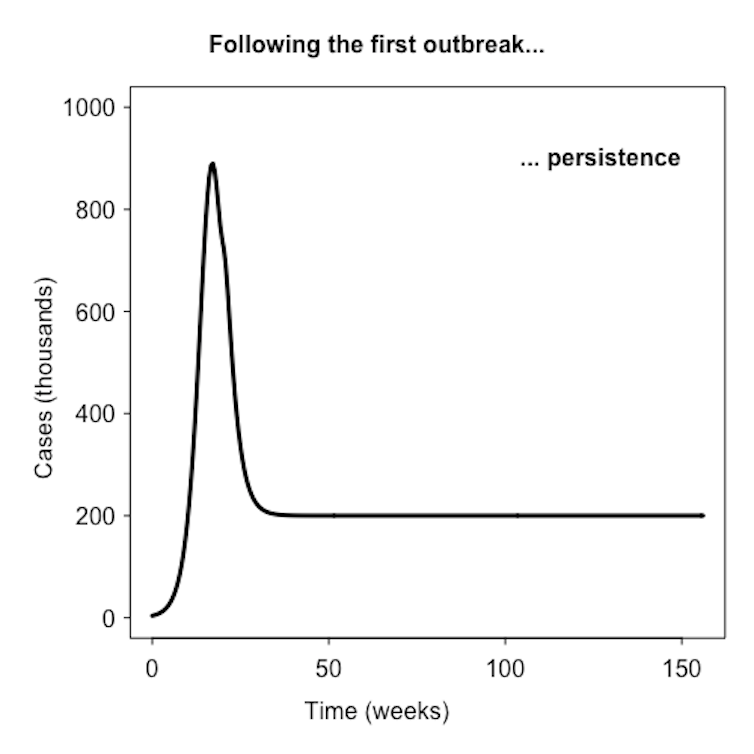 An example of a disease progress curve for a long-term scenario following the initial outbreak: persistence at low levels. The number of cases and duration of the epidemic for illustrative purpose only.

In temperate climates, seasonal influenza spreads rapidly through winter but mostly dies out in summer, only to come back the following year. In between outbreaks, the flu virus survives in Asia from where it emerges every year. Large measles epidemics, before vaccines were available, occurred every two or three years, interspersed with small outbreaks (figure below). The recurring pattern was caused by people being born all the time without vaccine protection. Next winter, when children went back to school, there were enough susceptible ones to create a large outbreak. With mass vaccination of children, this influx was slowed down enough to create herd immunity and almost eradicate the disease. However, measles is returning because vaccination levels are falling below the herd-immunity threshold. 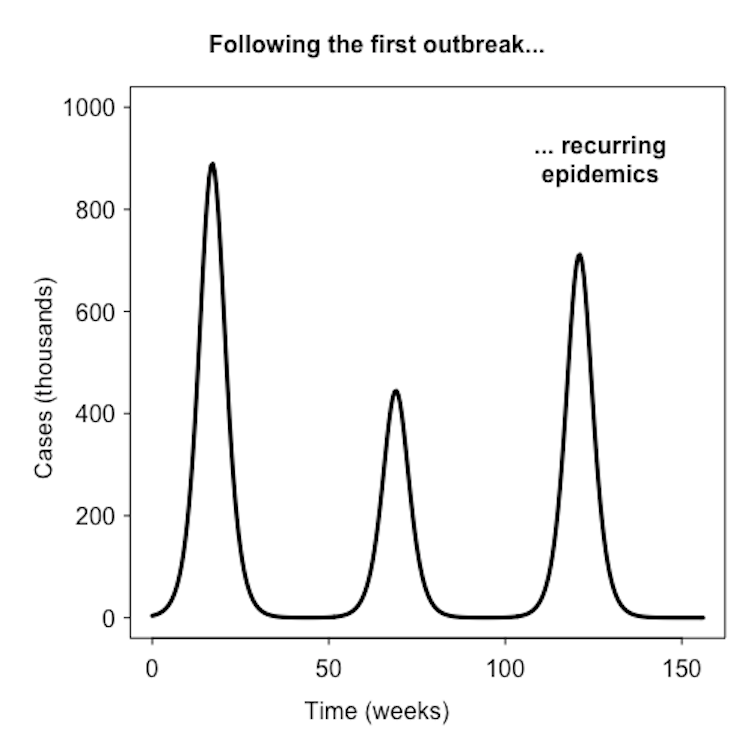 An example of a disease progress curve for a long-term scenario following the initial outbreak: recurring epidemics. The number of cases and duration of the epidemic for illustrative purpose only.

So what is the future of COVID-2019? While we cannot be sure, mathematical models help us explore scenarios and identify potential outcomes, building on our experience of past outbreaks. The governments are hoping that a combination of social distancing, border closures, isolation of cases, testing and increasing immunity in the population will slow down the spread of the coronavirus and will hopefully open up successful eradication strategies. Yet past experiences suggest that we may need to learn to live with the coronavirus for years to come.