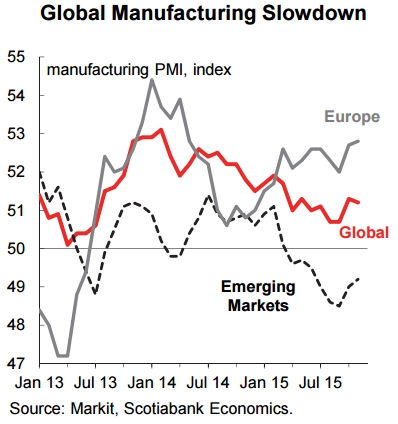 Global manufacturing has been on a descending trend since early 2014, driven by a slowdown in emerging markets as China transitions away from a manufacturing to a services-based economy, and Brazil and Russia struggle with deep recessions and political turmoil. Surveys showed that the global manufacturing PMI that combines survey data from countries including the United States, Japan, Germany, France, Britain, China and Russia remained tepid in November.

In contrast, Europe saw steady growth, manufacturing picked up to a 19-month high in November, but the pace was still relatively modest. Every country in the euro area (with the exception of Greece) posted a moderate to strong expansion in November. European outperformance is likely to extend into 2016, building on its current momentum. Steady gains in the manufacturing PMI enters its 29th consecutive month in November, with particular strength seen in Italy, Spain and Germany.

However, ongoing structural reforms in China will lead to a difficult environment for the global manufacturing sector in the coming years. Chinese manufacturing contracted for the 9th consecutive month in November, as factories are being squeezed by slowing domestic and international demand, as well as increasing competition from emerging Asia. Facing what could be its slowest pace of economic expansion in a quarter-century, the Chinese government is pushing its manufacturing industry to transform and move up the value chain. As China transitions away from a manufacturing to a services-based economy, emerging markets counterparts are bearing the brunt.

Lack of inflationary pressures is discouraging manufacturers to raise prices, which have fallen for three consecutive months and are crimping profits. Somewhat offsetting the effect of falling prices for finished goods are lower input costs such as steel and fuel. North American activity is mixed, with Mexico and the U.S. recording diminishing gains over the last year, while Canadian production softened to a survey-record low on the back of plunging crude oil and commodity prices.

Employment in the manufacturing sector has declined in the last few months following a steady two-year expansion, and surveys indicate hiring managers will continue to exercise caution. A combination of weakening emerging market demand, bloated inventories and a strong U.S. dollar is weighing on exports and new orders, and a slowing in factory hiring.