Trends in vote intention polls show that the Conservatives continue to have a sizeable lead over their rivals. As of October 1, the Conservatives were on 33%, with Labour and the Liberal Democrats running well behind, tied at 22% each. Nigel Farage’s Brexit Party is a continuing presence with a 13% vote share, roughly three times greater than the Green Party’s current share.

The Conservative lead in the polls does not spell an easy election victory, however. Our modelling on how vote shares like these could translate into seats shows that the Conservatives would win 331 seats – a razor-thin majority (although an increase of 14 from 2017). Labour would fare poorly, with 211 seats (down from 262 in 2017) and the Liberal Democrats would rebound to 34 seats (up 12). The SNP would win a very healthy 50 seats (up 15), while Plaid Cymru would hold its four. The Greens and the Brexit Party would get one seat apiece. 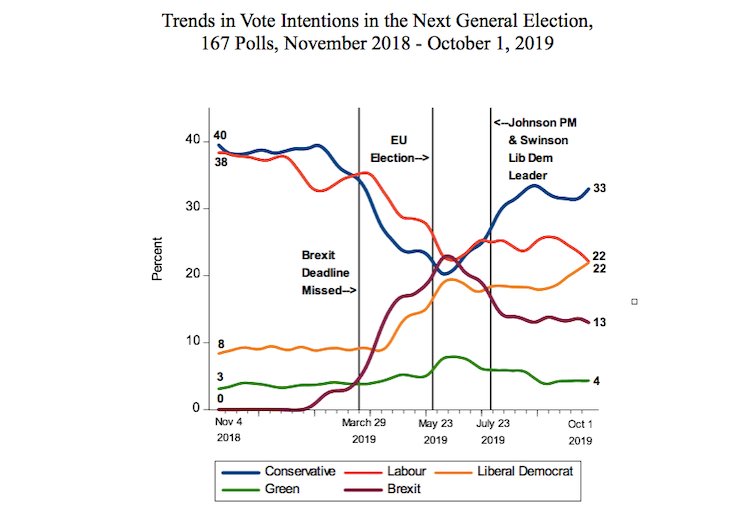 These numbers are not the last word, of course, since the parties’ electoral fates will be strongly influenced by how the chaotic Brexit drama plays out. If the latest proposal is really Prime Minister Boris Johnson’s “final offer” to the EU and he doesn’t concede any more ground, the current turmoil will converge on one of two outcomes. One is “no deal”, which is the consequence of the Johnson strategy if the EU turns down his new proposal on how to manage the Irish border. The second and less likely outcome is to remain in the EU – an option driven by Labour, the Liberal Democrats and other Remain supporters in the House of Commons.

The Johnson strategy is likely to consist of blaming the EU for a breakdown in negotiations if it refuses to accept the revised backstop. In the subsequent general election campaign, the prime minister will then stand on a ticket of a no-deal Brexit while relabelling it as a “World Trade Organisation Brexit” or a similar phrase. This is something that Farage has already done, and Johnson’s aim would be to sweep up as much as possible of the Brexit Party’s 13% vote share.

This approach is likely to trigger a cold war with the European Union and negotiations about a future trade relationship will very likely stall as a consequence. However, it is also likely to deliver a comfortable Conservative majority government for the next five years. And since many Remain Conservative MPs have been purged and will not be back in parliament after the election, the centre of gravity of opinion in the party will shift even closer to a no-deal Brexit.

At first sight the so-called “Benn” Act looks like a formidable barrier to this strategy. This legislation requires the UK government to request a Brexit extension rather than allowing no deal to happen on October 31. However, it can be easily circumvented. The government just needs to write the letter to the EU asking for an extension as mandated in the act, but simply add a codicil which, in effect, says that the British government won’t negotiate on its final offer, even if the Brexit deadline is extended. The act requires the government to ask for an extension, not to actually get one, since this requires acceptance by the EU. That said the EU is likely to grant what will be a meaningless extension in order to prevent a no-deal Brexit on October 31.

Meanwhile, on the opposition benches

The Remainer strategy turns on getting a caretaker government into office to replace the Conservatives and holding a second referendum. There would be a good chance that Remain would win that referendum since according to the website What the UK Thinks more people now regret leaving the EU than think the vote to leave was a good idea. It also reports that 53% of respondents now want to remain in the EU and 47% want to leave.

That said, this scenario involves the opposition parties agreeing on who should lead the caretaker government. That has been a significant sticking point so far.

The 35 MPs from the Scottish National Party would support a caretaker government led by Labour’s Jeremy Corbyn, but there is a question mark over what the Liberal Democrats would do. It might be argued that Jo Swinson, the new Liberal Democrat leader, has shown poor judgement first by opposing a second referendum and subsequently refusing to cooperate with Labour to stop a no-deal Brexit.

However, Swinson might be playing a different game. Assuming she wants the Liberal Democrats to replace Labour as the major alternative to the Conservatives – as she surely does – refusing to cooperate with Labour makes more sense. If Labour is badly beaten in a forthcoming election, then bitter recriminations will follow between the left-wing “Corbynistas” who control the party organisation and moderate, pro-Remain Labour supporters unhappy with Corbyn’s wavering on Brexit. In the wake of a post-election Labour civil war, the Liberal Democrats would be poised to hoover up many of these moderates and move towards a reconfiguration of the national party system.

Whether a deliberate strategy or not, Swinson’s approach of limited cooperation with Labour will certainly help to produce a majority Conservative government. Equally clearly, it will hurt Labour, which will win fewer seats than if there were a Labour-Liberal Democrat tactical tandem working to defeat Conservatives in marginal constituencies around the country.

Labour’s continuing weakness in public opinion polls leaves it vulnerable to a large-scale defeat. In 2017, Labour’s fortunes increased dramatically as the election campaign progressed. The continuing turmoil and massive uncertainties surrounding Brexit and the deep unpopularity of Corbyn make it unwise to assume that a similar surge will happen again.