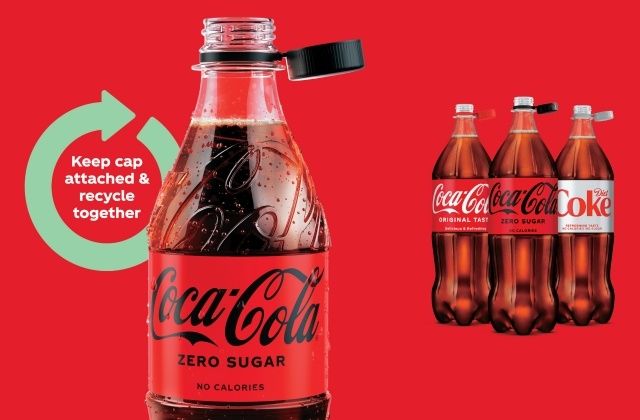 Coca-Cola knows that plastic waste is a big problem around the world today. In an effort to help solve this environmental issue, it is introducing new bottles with attached caps so they will not get thrown out.

Coca-Cola is aware that the lids of softdrink bottles often end up as litter and only add to the mounting landfills. When plastics break down, they can make their way to the air and bodies of water and ultimately cause illness to people and harm marine life.

Thus, to solve this, Coca-Cola announced it is rolling out the new versions of its plastic bottles. The company is releasing them in the United Kingdom for now and may possibly be launched in other regions later. The new bottles with the attached cap were tested in Spain last year, and now they are being formally introduced.

At any rate, the attached cap design of the soda bottles is supposed to make it easier for people to recycle them. Typically, the caps and the bottle are separated for the recycling process, but now the whole bottle with the lid can be recycled together at once. This will also keep the lids out of the trash bins.

As per Fox Business, the new Coca-Cola plastic bottles will be used in drink products including Coke, Coke Zero Sugar, Sprite, Diet Coke, Fanta, and Dr. Pepper. The softdrink producer said that these drinks will have attached caps by early 2024 in the U.K.

Jon Woods, Coca-Cola Great Britain’s general manager, said earlier this week that the new packaging is a small change that they hope will have a big impact. He said this would also make sure that when consumers recycle any of the Coca-Cola bottles, the caps will not be left behind.

“This great move from Coca‑Cola Great Britain supports the ongoing work with the U.K. Plastics Pact in trying to ensure that as much plastic packaging is captured and recycled as possible, Adam Herriott, sector specialist at WRAP, stated in a blog post regarding the new bottles.

He further explained, “In 2020 we saw the amount of plastic packaging being recycled increase from 44% to 52%. The small changes are what add up to make a big difference and when it comes to recycling, the higher quality of the material the better. We look forward to seeing more innovations in this area.”