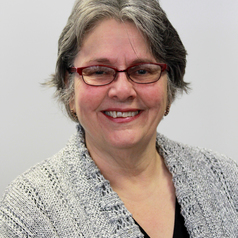 The Coalition Avenir Québec (CAQ) government has introduced Bill 21, a law that would supposedly entrench religious neutrality in the province. It would do so by prohibiting providers of government services in positions of authority such as judges, police and teachers from wearing religious symbols, including hijabs (headscarves for female Muslims), turbans (for male Sikhs), kippas (skullcaps for male Jews) and visible Christian crosses.

Bill 21 also prohibits providing or seeking a government service with one’s face covered. This principle is relatively uncontroversial in Québec, though some worry that it might discriminate against the very few Muslim women who cover their faces.

The principle behind Bill 21 is laicity, or secularism. Québécois are currently debating the human rights implications of Bill 21, just as they debated earlier versions proposed by the Parti Québecois government in 2013 and the Liberal government in 2014.

I wrote a detailed analysis of these debates in an academic article “The ‘Quebec Values’ Debate of 2013: Minority vs. Collective Rights” for the Human Rights Quarterly, published in 2018.

The first clash is about whether public servants in positions of authority, while at work, should be permitted to exhibit their religious beliefs through their dress.

For the CAQ, prohibition of government servants’ wearing of religious symbols is necessary to preserve the secular character of Québec society. The prohibition is a relatively minor violation of freedom of religion, if indeed it is a violation at all.

Yet the 1975 Québec Charter of Human Rights and Freedoms includes the right to openly profess religious beliefs without fear of reprisal. International law protects this right too, in the International Covenant on Economic, Social and Cultural Rights, Article 18, as does a 1985 decision by the Supreme Court of Canada.

From this point of view, while the state has to demonstrate its religious neutrality, its individual employees do not have the same obligation. 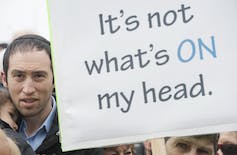 A man wears a Kippah during a demonstration opposing the Quebec government’s newly tabled Bill 21 in Montreal, Sunday, April 14, 2019. THE CANADIAN PRESS/Graham Hughes

The second clash is about women’s rights. Bill 21 states that the Québec nation “attaches importance to the equality of women and men.” This equality takes precedence over religious customs that imply discrimination against women.

Some Québec feminists, including some of Muslim background, maintain that men have always used religion to oppress women. Even if Muslim women wear the hijab voluntarily, many feminists believe, they have been taught to believe that the sexes are unequal.

Some of the older women who support Bill 21 remember when the Catholic Church dominated Québec. During the 1960s Quiet Revolution, Québécois freed themselves from the church’s control over marriage, divorce, contraception and abortion. These older women believe Bill 21 will similarly help Muslim women free themselves from religious control.

Those who oppose Bill 21 argue that it is discriminatory to refuse the opportunity of state employment to women who choose to wear religious symbols. They believe the ban on religious clothing and accessories will undermine some minority women’s right to employment, as in the case of Muslim women teachers.

Opponents also maintain that women who enjoy equality should be permitted to make independent individual decisions about whether to wear the hijab. If women are being forced to wear religious clothing, then the people forcing them should be punished, not the women themselves.

The third debate is about collective versus individual rights. Bill 21 (preambular paragraph 8) states that:

“Laicity should be affirmed in a manner that ensures a balance between the collective rights of the Québec nation and human rights and freedoms.”

According to Bill 21, these include the collective right to maintain Québec’s religious cultural heritage, even if the state is formally secular. Thus for example, religious place names can still exist.

People favouring the new law believe in the right of the community to a certain level of social integration or cohesion. It is important for all to live together in harmony, emphasizing sameness rather than difference. People who speak French at home are more likely to believe this than people who speak other languages.

Many critics of this view assume that anyone who defends it is afraid of residents of Québec not descended from the original French Catholic settlers. The law appears to be directed primarily against Montreal and Québec City and reflects a fear of strangers in Québec’s more homogeneous regions.

Critics argue that it’s not necessary for more recent immigrant groups — or for long-standing Quebecers like Jews — to remove their religious symbols in order to be part of Quebec society.

If Bill 21 is passed, it’s likely that many Québec Muslims, Jews and Sikhs will migrate to other parts of Canada so that they can freely manifest their religions at work. The rest of Canada will gain from this migration, and Québec will lose.