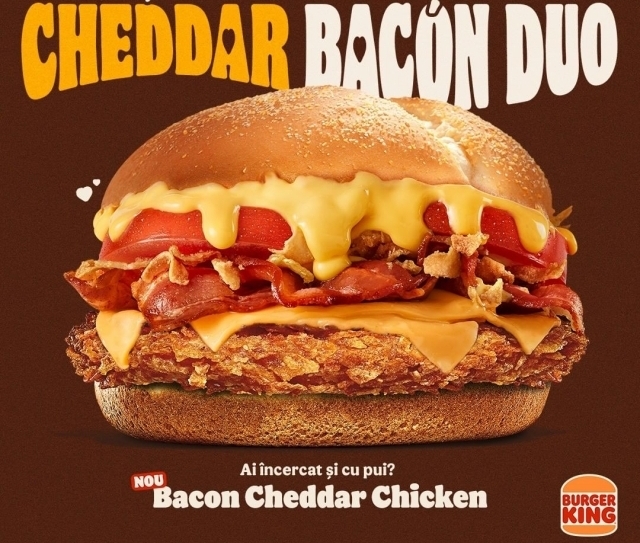 Burger King Romania is starting the year 2022 with an offering of new food items. The burger joint has expanded its menu lineup by launching the Bacon Cheddar Chicken and the Chicken Jr. burgers.

QSR Web reported that the Bacon Cheddar Chicken is the chicken version of a favorite at Burger King Romania, which is the Cheddar Bacon Whopper burger. The fast-food chain also added two types of sauces and these are salsa and curry sauce.

The food additions at the start of the year do not end with the new sandwiches and sauces as Burger King Romania is also introducing donuts for dessert and two flavors are available. The Chocolate Choco Donut and Strawberry Ruby Donut are fresh offerings that can be purchased at the restaurant's Brașov and Bucharest branches in Romania.

The Chicken Jr. burger costs just 4.90 lei, while the Bacon Cheddar Chicken costs 19.90 Ron. The latter is under the premium burger lineup at Burger King Romania.

As per Romania's Business Review, the two sauces are blends with international influences, and they are the new flavors to join the existing varieties that include mustard, garlic, barbecue, and sweet chili. The said sauces are said to be mostly preferred by Romanian customers and are usually used for the Burger King nuggets, chicken wings, and other dishes that are good to be eaten with some dips.

All the newly added menus are already available in eight Burger King store outlets where five of which are located in shopping malls in Bucharest and three stand-alone restaurants, including one in Brașov. Customers who cannot visit the stores can also order their food through delivery partners such as Takeaway.com, Bolt Food, Glovo, and Tazz.

"In 2022, our focus continues to be Burger King fans. We constantly analyze the consumption behavior of Romanians and we act to meet their preferences," Burger King Romania marketing manager, Alin Nenciu, said in a statement regarding the introduction of new foods. "Proof of that is the chicken products, preferred by Romanian customers, which we've launched starting 2021, a trend that will continue in 2022 as well."