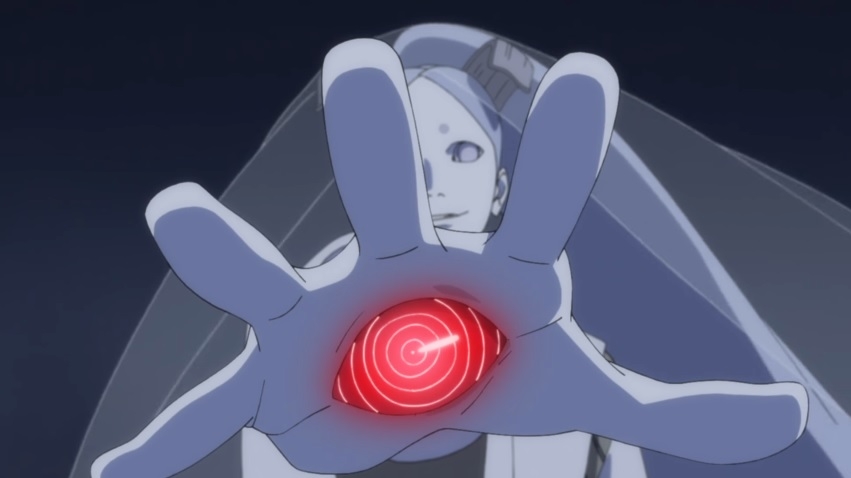 The upcoming installment of “Boruto: Naruto Next Generations” manga is potentially a major info dump. Meanwhile, Amado’s defection to Konoha is getting approved, per a leaked copy of “Boruto” chapter 45.

“Boruto” chapter 45 picks up from a shocking turn of events that involved Amado sneaking into Konoha, taking Shikadai hostage, and then declaring he is seeking to defect. In exchange, he promised to provide valuable pieces of information that could help Konoha in dealing with the Kara organization.

First, the fact that the leaked “Boruto” chapter 45 shows Amado spilling information suggests that he is eventually accepted by Naruto into Konoha. However, Shikamaru will not let him off the hook after literally strapping a bomb around his son’s neck.

The images in the leaked copy of “Boruto” chapter 45 show that most of Amado’s first round of information revolves around a secret of the Otsutsuki clan. Fans are already familiar with the chakra fruit that sprouts out of the God Tree only every thousand years. Otsutsukis move through foreign dimensions to acquire this fruit and use it to gain immense power.

However, Amado adds in “Boruto” chapter 45 that the Otsutsukis are also upgrading every chakra fruit they harvest. Also, this practice continues. This just means that the shinobi world is in far more danger than Konoha once thought.

Right now, the biggest threat to Konoha is Jigen since it was confirmed that Isshiki Otsutsuki could act through him. Amado reveals in “Boruto” chapter 45 that Jigen used to be an ordinary human before becoming a vessel of Isshiki. However, the leaks indicate that there is not much known about Jigen’s real origins.

As promised, Amado also provides information on Jigen’s Ten Tails that he is keeping captive in a different dimension. “Boruto” chapter 45 provides a glimpse of Code, who was last known to be guarding the Ten Tails.

Amado’s motives are still yet to be revealed in its entirety. But there is no doubt that he could be an asset to Konoha, especially since they do not know much about the karma seal. Boruto has one, and he is confirmed to be a vessel of Momoshiki Otsutsuki, who can control his body without Boruto knowing.

The digital release of the official English translation of “Boruto” chapter 45 should be out very shortly from the time of this writing. Viz’s Shonen Jump and Manga Plus websites promise the chapter will arrive before the end of Monday, April 20.