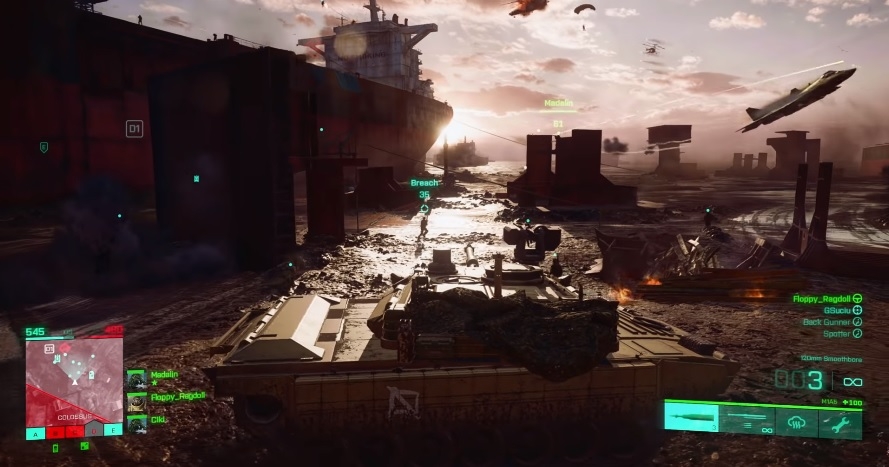 From the pre-alpha footage of the “Battlefield 2042” gameplay | Photo credit: EA/DICE via Battlefield / YouTube screenshot

The multiplayer-only “Battlefield 2042” is confirmed to have bots, called AI Soldiers, in the gameplay. EA recently explained why they are being introduced in the upcoming game, and that revealed they would serve different purposes on every game mode.

‘Battlefield 2042’ will have bots for a good reason

Aside from large-scale maps, DICE has also doubled the player count in “Battlefield 2042” from 64 to 128 on PC and new-gen consoles PS5 and Xbox Series X/S. Since multiplayer playlists are the only way to enjoy the game, it seems only fitting that the developer wants to fill those slots in every match, even when not enough players have entered the lobby, by using bots.

At least in the staple All-Out Warfare modes Conquest and Breakthrough, EA confirmed that “Battlefield 2042” will feature AI Soldiers. In the Multiplayer matches, the bots’ role is to fill the server so that every game is full regardless of the map in play. In Co-op games, the AI Soldiers will serve as the enemies allowing fans to team up with their friends.

While there is no single-player campaign in “Battlefield 2042,” players will still have the option to enter Solo matches. This should be a good way to practice their skills, especially for those who are new to the first-person shooter series. AI Soldiers will be joining Solo matches to help players train like they are actually facing enemies in a multiplayer setting.

With “Battlefield 2042” advertised as having some of the biggest maps ever released in the series, it is not surprising to see the staple Conquest game mode return. As the name suggests, winning Conquest matches requires opposing teams to gain control of their enemies’ control points across the map.

Conquest will be different in “Battlefield 2042” with the introduction of Sectors. In the illustration EA provided, the maps will be divided into several areas called Sectors. Each area has multiple control points that teams need to take over to gain control of a Sector. This changes the way Conquest will be played because it means several squads can go after different control points at the same time.

Breakthrough, on the other hand, has previously featured Sectors on the map. The difference in this mode is that each team is assigned a specific role — attacker or defender. The attacking team’s goal is to take over the control points, while defenders have to make sure the opposing team would not push the front line further. In “Battlefield 2042,” the attackers need to dominate all control points to win the match.

Two more game modes will be introduced, but details are still under wraps. One of them is called Hazard Zone, which is not battle royale but is described by developers as a “tense experience” combined with sandbox elements. The fourth mode is still unnamed, but it is likely one of the highlights at EA Play Live on July 22. “Battlefield 2042” will be released on Oct. 22 on PC, PS4, PS5, Xbox One, and Xbox Series X.