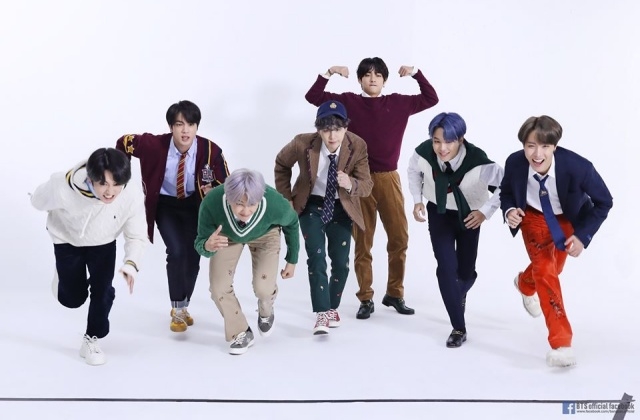 BTS is undeniably the biggest boy band in the world today. They have fans all over the world although the members that include Jungkook, V, Jimin, Jin, J-Hope and Suga only speak Korean. It is only RM who can speak English fluently so he, most of the time, serves as the group’s translator when they are on TV, shows or concerts outside of South Korea.

Though BTS managed to get popular despite their inability to speak English fluently, the band’s agency, Big Hit Entertainment, saw it necessary for the fans to directly understand what the members are saying, without the need for a translator or third person to send the message in their behalf.

With this in mind, Big Hit decided to launch an educational show that will feature all the BTS members. As per Soompi, the upcoming short series is called “Learn Korean With BTS” and apparently it aims to teach the Korean language to fans around the world.

“With the recent popularity of K-pop and other Korean cultural contents, the demand for learning Korean is increasing greatly, so we are planning Korean education contents to improve our accessibility,” an agency rep said. “We hope that through learning Korean, global fans will be able to deeply empathize with the music of artists and enjoy a wide range of contents.”

It was said that the format is the same as the band’s previous variety show titled “Run BTS!” in the videos, the members will pick out Korean words and expressions that they frequently used when in concerts, shows and so on.

The videos will only be three minutes long but they are expecting fans to learn simple Korean phrases and grammar through them. The good thing is that fans will see more of their BTS teachers as Big Hit is releasing a total of 30 episodes via WeVerse on March 24 at 2 p.m. KST. The following episodes after the launch will regularly air every Monday at 9 p.m. KST.

“Learn Korean With BTS” was created with the guidance from Korea Language Contents Institute (KOLCI) teachers and professor Heo Yong from the Department of Education at Hankuk University of Foreign Studies.

Meanwhile, BTS has been canceling many shows included in their 2020 world tour that was initially set to begin in April. The cancellations are due to the ongoing COVID-19 pandemic. It is yet to be announced if the other activities of the group, set for the coming months, will still proceed.