Australia’s demand for mortgages picks up sharply in response to rate cuts in June and July, RBA unlikely to be impressed 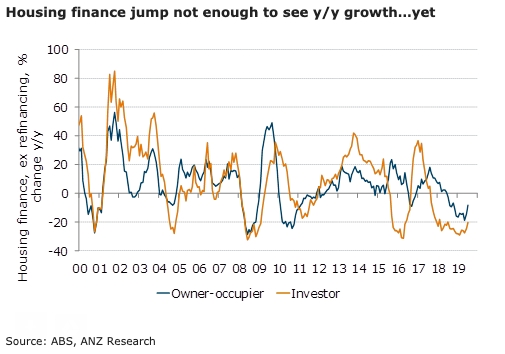 Australia’s demand for mortgages picked up sharply in response to rate cuts in June and July, with 5.1 percent m/m growth in July. The strength was reflected across both owner-occupiers and investors. The Reserve Bank of Australia (RBA) is unlikely to be impressed by these numbers, according to the latest report from ANZ Research.

Investor lending was up 4.7 percent m/m in July, ex-refinancing, the strongest monthly result since September 2016. This is a strong sign of investor optimism after sharp declines in investor demand during the housing price adjustment. Annual growth in investor lending is still sharply negative (-20.4 percent y/y to July), however this is the smallest negative result since July 2018.

Owner-occupier lending grew 5.3 percent m/m in July ex refinancing, the highest result since August 2015. Annual growth is still negative (-8.3 percent y/y), but it is the smallest negative result since October 2018.

Interestingly, approvals for the purchase of new homes jumped 20.8 percent, the strongest rise since 2001. This suggests that the pick-up in housing prices and finance will soon feed through into construction activity.

Optimism in the housing market following green shoots in prices in Sydney and Melbourne prices may have also spurred on extra demand. Ongoing elevated auction clearance rates suggest that the strength has continued into September.