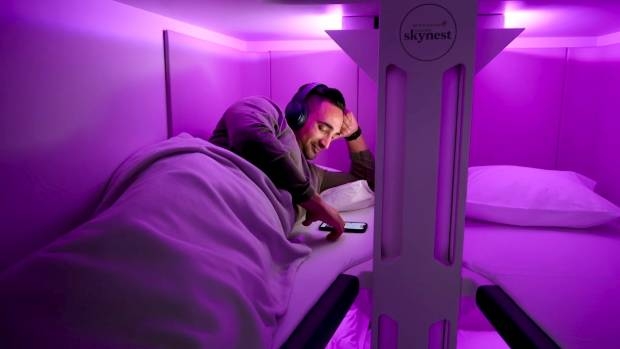 The feature will allow economy class passengers for the first time to stretch out for some sleep on actual beds during their flights.'

Air New Zealand will offer six full-length sleeping pods per flight under its "Skynest" concept, among the features included on its new Boeing 787 Dreamliners, due to enter into service in 2024.

The feature will allow economy class passengers for the first time to stretch out for some sleep on actual beds during their flights.'

Located between the Premium Economy and Economy cabins, each sleep zone pod will provide a full-size pillow, sheets, earplugs, a reading light, a USB port, and a ventilation outlet. The pods are arranged in two rows, each with three beds, like bunk beds.

An Air New Zealand media spokesperson stated that the airline is still ironing out the finer points of how the pod reservations would be made.

However, he provided some details on how it would seem, such as the restriction of each passenger to a four-hour pod session at an additional expense to their ordinary Economy class seats.
The bedding will be changed after each session.

All the amenities of the airline's Business Premier class will be present in these, but there will be a fully closed door and enough room for two persons to eat at the same time.