What can drones do to protect civilians in armed conflict? 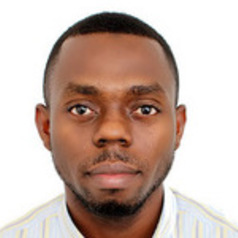 Drones are usually in the news for bad reasons, like controversial killings of suspected terrorists in the Middle East, bombings of Saudi oil facilities or an assassination attempt on Venezuelan President Nicolas Maduro.

What many people may not know is that United Nations peacekeepers use drones to protect civilians from violence. These drones are different: They don’t carry weapons.

I have followed the U.N.‘s use of drones since its beginning in 2013 and have spoken with peacekeepers and U.N. officers who are familiar with their use. I believe drones have the potential to save lives.

But that doesn’t mean they necessarily will.

The U.N. is often called in to help calm trouble spots around the globe, sending soldiers, police and other officials from U.N. member countries to conflict zones to keep warring groups separate and reduce violence.

In countries with civil wars and sectarian conflict, civilians are often caught up in the violence, either by accident or targeted intentionally by armed fighters.

In July 2016, for instance, fighting between armed militias in Juba, the capital of South Sudan, pinned U.N. soldiers in their own base, leaving them unable to help protect civilians. When more than two weeks of fighting ended, 73 civilians were dead, 217 women and girls were sexually assaulted and 36,000 civilians fled into refugee camps.

Just a year later, in 2017, in the Central African Republic, more brutalities against civilians under U.N. protection left 188 dead, 25 women and girls raped, and many more displaced, according to the Human Rights Watch advocacy group.

These types of incidents are common throughout the U.N.’s many decades of peacekeeping efforts, with civilians slaughtered, raped or displaced even while supposedly under U.N. protection. 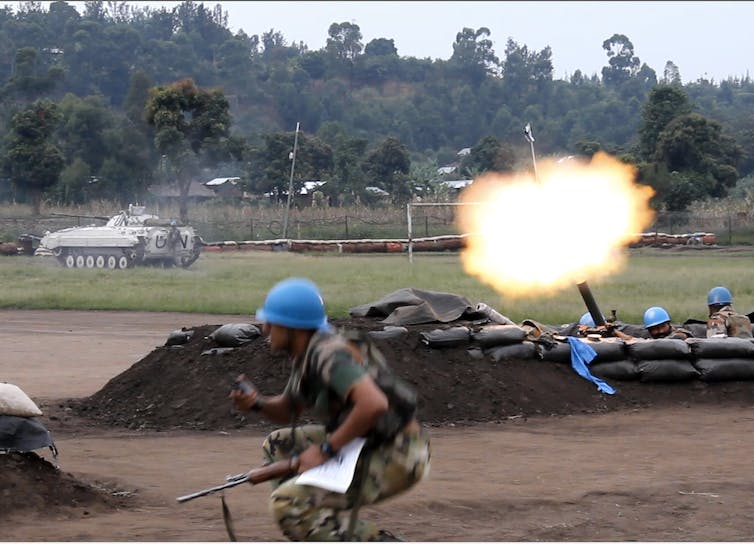 U.N. peacekeeping forces defend their base from a militia attack in Democratic Republic of Congo. MONUSCO/Flickr, CC BY-SA

Help may be in the air

Since 2014, the U.N. has been using drones in the conflict zones of Democratic Republic of Congo and more recently in Mali and Central African Republic to gather information, in hopes of directing peacekeepers to people and places under threat.

This sounds good in theory, but there are no known cases where drones have actually triggered troop movements that saved lives. At least not yet.

The U.N. has a history of trying new ways to protect civilians that end up not working out. For instance, plans to protect civilians in South Sudan or Central African Republic were not ultimately followed by the U.N. troops on the ground. So it’s not certain that new methods would, in fact, work better.

For one thing, getting drones in the right places can be complicated. In the Democratic Republic of Congo, there were five drones to cover more than 900,000 square miles, but there was money to operate only one at a time. On the ground, there is one peacekeeper for each 50 square miles. This is too small to guarantee a quick response to crises.

Even if drones are in key places, the information they gather has to get to peacekeeping soldiers quickly enough that a response can arrive and prevent violence. To be fast enough to save lives, drone pilots, intelligence analysts and the peacekeepers themselves have to coordinate closely.

The U.N.’s drones are unarmed, so the people who fly them by remote control have to write reports and send data to intelligence units to determine whether there are any threats to civilians, and, if so, what the peacekeepers should do about them. Most U.N. missions don’t have enough people or equipment to analyze drone footage, so the process can take days or weeks.

The 15 U.N. intelligence officers working in the Democratic Republic of Congo, for instance, say they have enough work to occupy hundreds more colleagues. However, the U.N. has historically avoided intelligence activity because of its association with covert operations, which run counter to the organization’s intentions of operating openly and without deception.

Even if peacekeepers do get timely information, they may not respond quickly to prevent civilians from being harmed if they do not have enough soldiers or patrol vehicles or helicopters to respond. 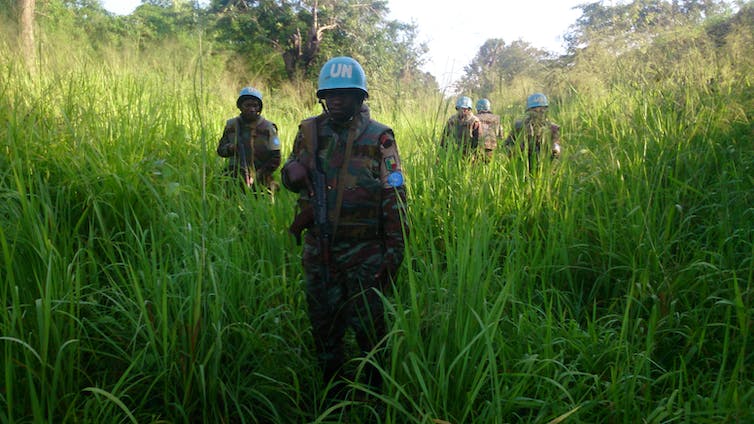 U.N. peacekeepers from Benin patrol in the Democratic Republic of Congo, on the lookout for local armed militia groups. MONUSCO/Flickr, CC BY-SA

All these problems don’t mean drones are useless at protecting civilians. For instance, U.N. drones discovered armed groups smuggling gold believed to be providing funding for the armed groups and their activities. That was news to the U.N., and authorities stopped the smuggling. Drones also helped save 14 people in Democratic Republic of Congo after their boat capsized.

I believe these efforts and others aimed at preventing violence could be more effective with more support from U.N. member nations. In recent years, though, wealthy countries have slashed their contributions to the U.N. peacekeeping budget and reduced the number of soldiers they’ll send on missions. That has left peacekeeping missions to do their work with ill-equipped, poorly trained soldiers from poor nations.