The burden of showing Springbok support in the 21st century 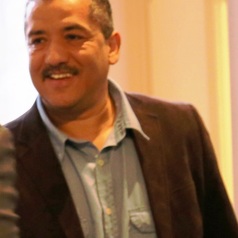 The Rugby World Cup 2019 is done and dusted, with South Africa securing victory over England in the final match.

But a question still lingers: was it a burden for some, maybe many, South Africans who supported their national team but also had to show support for the Springbok emblem?

In the days before the final game, a few South African opinion makers and politicians speedily and vocally entered the frenzy of Springbok support. But they side-stepped a fundamental issue at hand – the moral legitimacy of this symbol that has roots deep in colonial, segregation and apartheid rugby structures.

The vast majority of rugby fandom that includes match ticket payers, television viewers and the few privileged ones in the private suites of corporate companies does not often show much concern about this historical burden. Yet, there should be much concern about it – particularly in the status of the Springbok symbol.

It’s a symbol that has a recorded history dating back to 1898 when a South African cycling team displayed the Springbok in a series of meetings in England. Since then it has remained a symbol of white exclusitivity. When the apartheid sport structures started to consider black people eligible for receiving Springbok colours from the late 1960’s they were awarded half Springbok colours – only the head. Examples included bodybuilders David Isaacs and Pat Graham. 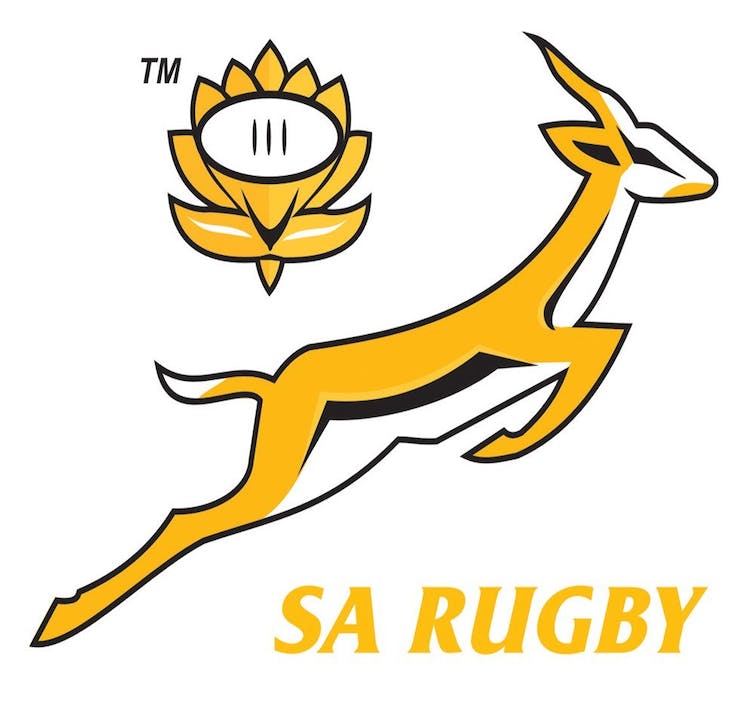 When Nelson Mandela, in a spirit of reconciliation and goodwill, showed support for retaining the symbol in 1995, there would have been a sigh of relief among the former establishment rugby fraternity (maybe even a sense of victory). For their part, former anti-apartheid rugby activists, who were taken up in the post-apartheid structures, had to come to terms with embracing a symbol that they had previously rejected.

But was it a Pyrrhic victory for apartheid sport supporters? In my view it was because the Springbok represents the persistence of apartheid structures in South African society.

Criticism against the new South African sporting order is now considered old fashioned. But, in my view, criticism against the Springbok symbol is an act of loyal resistance because it could lead to a rethinking about who constitutes the South African rugby nation. And a situation where the skin colour of a national player is of no concern, where there is no mention or reference to the pigmentation of players.

This isn’t about the liberal view that skin colour isn’t a factor. It’s about campaigning for a shift and a radical change in the country that will lead to race consciousness being lifted from rugby. But for this shift to happen the fact that the burdens of the past are still felt in the lived experiences of aspirant players needs to be recognised.

The legacy lives on

The reason so little has changed is that the apartheid rugby administrators of the now-defunct South African Rugby Board and its race-based sub unions triumphed over the transformation period in the early 1990s. They were at an economic and cultural advantage over the non-racial South African Rugby Union. 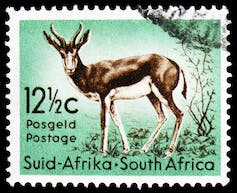 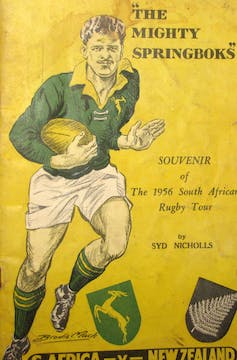 A 1956 magazine placed inside rugby programmes at matches. Hugh Winters/FLICKR

It is true that doors that were previously shut, opened for players in the 21st century. And that many of the current players would not have even been considered for national representation prior to the 1995 Rugby World Cup tournament.

But that’s a small part of the story. Grassroots development of school rugby in economically poor areas never took off on a grand scale. Instead, the way into the team was through the high fee paying schools.

The serious minded South African rugby enthusiast – irrespective of political persuasion – is saddled with this burden of post-apartheid Springbok history. Not even the fielding of a black captain can eradicate it. The statistical norm remains the established Apartheid standard and everything outside this template does not count.

I would argue that, without a doubt, the retention of the springbok symbol retards fundamental change in rugby and broader society. It is a colonial, segregationist apartheid symbol that has not shifted society fundamentally since 1995.

The South African cricket and netball national federations did away with the Springbok symbol and they were not branded as unpatriotic.

Social movements need to become more active in agitating for mass participation and historicising of South African non-racial sport. This is necessary because people forget and then repeat societal fissures.

If there is no social movement, the majority of people will look to the 1995 Mandela-Pienaar or 2010 World Cup moments that are short lived and, paradoxically, filled with empty promises.

Ordinary citizens, like me, should watch the game for enjoyment and the beauty of movement. The final score should not be a burden because of showing support for an outdated Springbok symbol in the 21st century.