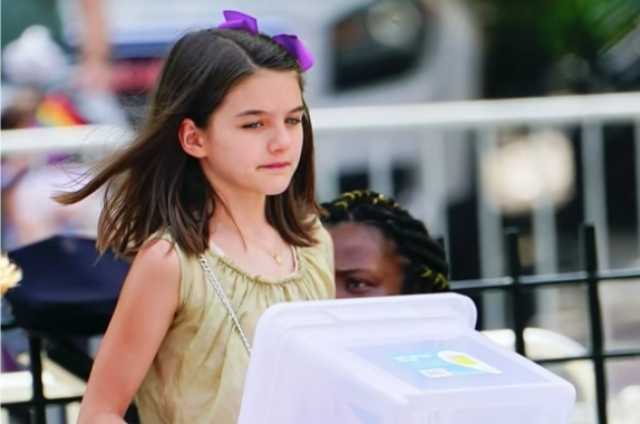 Suri Cruise is already 14 years old, and until now, she doesn’t have a sibling. It was reported that the teen got excited when her mom Katie Holmes started talking about having a child again since it means she will have a younger sibling.

Katie’s plans to have another baby

As per the New Idea, Katie Holmes has been looking for options to have her second child. She is not the only one who is longing for a baby, but it was said that Suri Cruise also wants to be a big sister now.

Previously, there were reports that say Katie already adopted a son, and the proofs shown in these claims were photos of the “Dawson’s Creek” actress while she was in the streets of New York and carrying a baby boy. In the articles, Suri’s mom was said to be out in New York to stroll with her baby, but it turned out that the 41-year-old actress was only holding a baby of another woman, perhaps her friend.

In any case, New Idea alleged that Katie Holmes is considering three options to have her another child, and these are adoption, surrogacy, and looking for sperm donors, which probably means the IVF procedure. Then again, out of these three methods, it was said that Tom Cruise’s ex-wife prefers adoption because there are many children who are in need these days.

“Katie is only 41 and feels like she still has so much to give a child,” the source allegedly told the magazine. “Since she split from Jamie Foxx, there’s been no man in her life but she of all people knows that’s not a problem. Suri’s also very much an independent young woman now and Katie’s been feeling that empty nest pain.”

It was said that Suri Cruise is supportive of her mom’s wish, and besides, she really wants a brother or a sister. She has been alone for so long and feels it’s already time for her to have a sibling. Tom Cruise’s daughter is said to be on cloud nine after learning she could be a big sister soon.

“Suri, who’s a really sweet kid was thrilled,” the tipster further claimed. “I think Suri was probably worrying about her mum a little too much for someone so young. It’s a lot of pressure on a young woman but in a way, a new baby will help set her free in a few years’ time.”

Gossip Cop previously debunked the report that Katie Holmes adopted a son and he was the one she was carrying in the photos. The publication confirmed from the actress’ rep that it’s not true and the baby is her friend’s kid. Even if it is true that Suri Cruise may want a sibling, the actress’ rep dismissed the rumors that Katie is planning to have another baby soon.