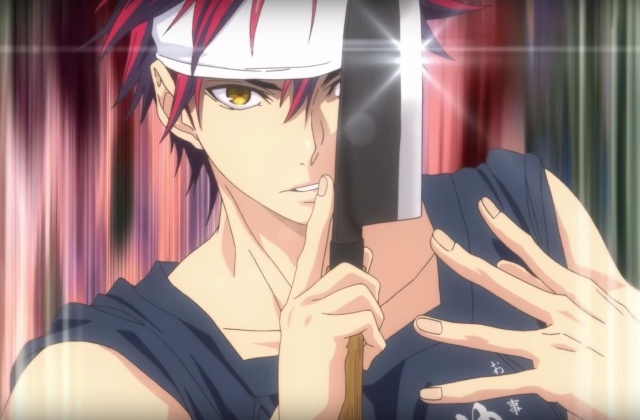 Photo by: Shokugeki no Soma

“Shokugeki no Soma” season 4 episode 2 is coming after the anime premiered on Oct. 12. This will be the series’ final season as the manga edition has already ended as well.

According to Monsters and Critics, 99 chapters of the manga are available to produce the “Shokugeki no Soma” season 4. Although the producers of the anime skipped some chapters, the Regiment de Cuisine matches were intact, but they were reorganized, so there will be no need for flashbacks or sudden jumping to another scene like in the manga. In this way, the flow of the story will run smoothly and prevent confusion as to what is happening.

About the fourth and final chapter

“Shokugeki no Soma” season 4 is also called the “Shokugeki no Soma: Shin no Sara” or “Food Wars! The Fourth Plate.” This is based on the manga that is being published weekly in Shonen Jump. In the edition that was released on June 3, it was announced that the end or final story of the manga series would be published on June 17, and so it concluded with chapter 316.

The premiere of season 4

“Shokugeki no Soma” season 4 premiered last weekend, and the first story is called “What We Want to Protect.” It showed the cooking battle between the Elite Ten Central and select participants in Team Shokugeki. The rebels won in this tournament, but there is still the next round to worry about.

As the viewers of the show already know, all the rebels are set to be expelled if they will lose, and this will also force Jōichirō Yukihira and Erina Nakiri to join Central where they will have no choice but to follow the group’s goals. The ramen master, Megishima, is also in the battle against the elites, but it is unclear how he became part of the Rebels, but perhaps, it was Soma who convinced him to join.

What to expect in the next story?

“Shokugeki no Soma” season 4 episode 2 will be a continuation of the battle. The participants will engage in the second round tournament of Régiment de Cuisine. The contestants for the Elite Ten Central consists of Tsukasha Eishi, Rindo Kobayashi, and Saito Somei, while the Rebels are represented by Tosuke Megishima, KugaTerunori, and Mimasaka Subaru.

As per the Anime New Network, “Shokugeki no Soma” season 4 episode 2 is titled “The Strobe Shines” and in the battle, Megishima prepared the African Ramen but Rindo’s Alligator Meat Dish as they are competing with cayenne peppers as the main ingredient and Rindo gained the most points, so the Rebels lost in this second round.

But the game is not yet over because The Rebels won in the first round. It is expected that the fight will be long and might even continue to the third episode. Meanwhile, “Shokugeki no Soma” season 4 episode 2 is set to air on Oct. 19 at 12:30 pm EST on Crunchyroll.