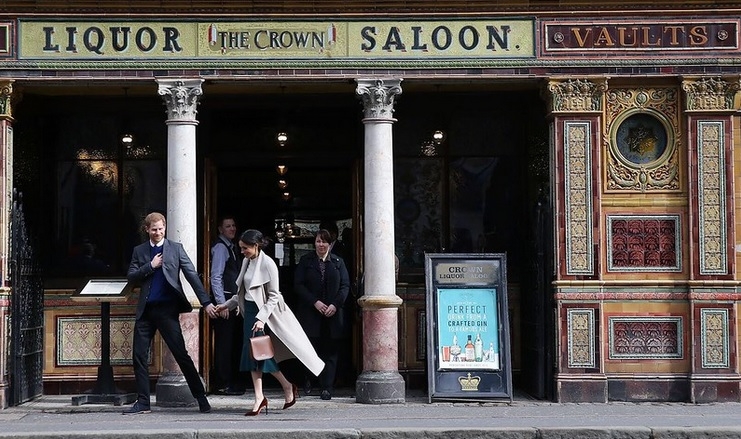 The Duke and Duchess of Sussex at Belfast’s Crown Liquor Saloon in March 2018. | Photo by Northern Ireland Office (licensed under CC BY 2.0) via Flickr.com

The previous months have been riddled with rumors that the two most famous royals — Prince Harry and Prince William — have been caught in a feud. The speculations were further ignited when the younger prince decided to split from their long-time charity organization and move out to an official residence about 25 miles away from where the Cambridges live.

There have been several rumors at what caused the supposed royal family feud. One of them suggests that Prince William’s purported earlier comment about how fast Prince Harry proposed and got married to Meghan Markle was what started it. However, there are now reports that having their separate organizations might have actually helped them have better relationships with one another.

The rumored reasons behind Prince Harry’s decision to leave The Royal Foundation and move to the Frogmore Cottage in Windsor (that cost millions to renovate) suggest that the royal family’s relationship is at a challenging point. However, sources have recently told PEOPLE that the major changes have actually allowed them to get together and bond as a family and not just for their official royal duties.

“They all know what’s at stake, and William and Harry know that their grandmother [Queen Elizabeth] in particular needs them to be on the same page,” an insider described as a royal “friend,” said. With Prince Harry and Markle welcoming their first child, the royals also have one more reason to bond. Two-month-old Archie reportedly has spent some time with his cousins Prince George, 5, Princess Charlotte, 4, and Prince Louis, 1.

Royal expert Victoria Arbiter explained it is not surprising for Prince Harry and Prince William to want their children to have a close bond because that was what they had with their cousins growing up. “The royal cousins are the only other people on the planet who understand this life. We’ll see that relationship and shared camaraderie as they get older,” Arbiter added.

Prince Harry and Prince William's wives are in good terms

Aside from the princes, it has also been relentlessly rumored that the Duchesses Meghan and Catherine have been encountering some problems with one another. Though none of it was ever really proven with solid facts and merely painted the women as just rivals. However, it is now being claimed that the new organization within the royal family duties between Prince Harry and Prince William have also benefited Meghan and Catherine’s relationships.