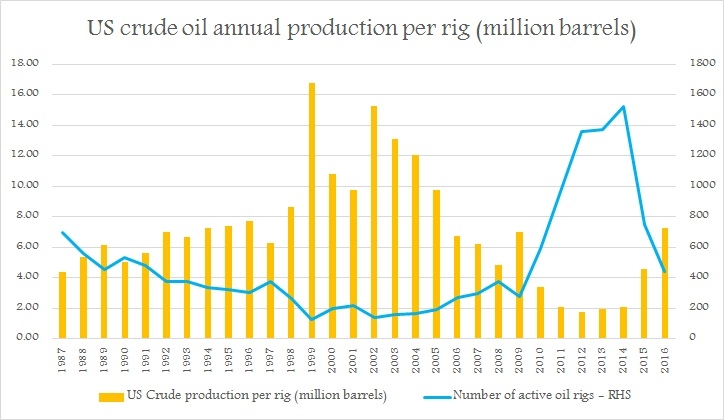 According to latest numbers from Baker Hughes, number of active oil rigs operating in United States has dropped to lowest levels since 2008/09 financial crisis. While back in October, 2014, the number of active rigs were at 1609 but as of last week it declined further by 15 rigs to 372, lowest since November, 2009.

In recent times, some market participants have taken note of the rig count to increase bullish bets on oil price recovery, suggesting drop in number of rigs indicating further declining in investments. However, our analysis suggests, when it comes to oil price recovery by changing fundamentals, other than intraday or few days boost, rigs count doesn’t matter much.

Shale technology, for good or bad have changed how oil markets operate, especially with their swing capability.

With such outlook, we don’t expect oil to recover much ground beyond $60/barrel in the medium term.

WTI is currently trading at $39.7/barrel, at 90 cents discount to Brent.