NZ’s CPI lifts in Q4, exceeds both market as well as RBNZ’s expectations 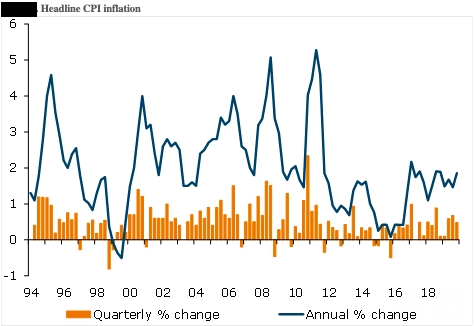 The surprise versus the RBNZ’s forecast comes from stronger-than-expected tradeable inflation. This is the more volatile and less persistent type of inflation, given it is heavily influenced by exchange rate movements and global supply and demand dynamics, ANZ Research reported.

Non-tradable (domestic) inflation rose 0.6 percent q/q, with housing-related costs (rents and the purchase of housing) remaining a persistent driver. With the housing market picking up, this theme looks set to continue for a while yet.

"Looking forward, we think economic activity is poised to gradually accelerate over the year ahead and grow around trend over the medium term, with resurgence in the housing market, improving business sentiment and the promise of a little extra government spending on key infrastructure all supporting. Unless something untoward happens, we think the RBNZ will keep the OCR at its current, stimulatory, level of 1 percent for the foreseeable future," ANZ Research further commented in the report.