In a California study, we found that pregnant women living near active high-production oil and gas wells have an elevated chance of having low birth-weight babies. This finding adds to a growing body of research on potential public health impacts from oil and gas operations.

We analyzed the birth records of nearly 3 million babies born to people living within 6.2 miles (10 kilometers) of at least one oil or gas well in California’s Sacramento, San Joaquin Valley, South Central Coast and South Coast regions – the state’s oil production epicenters – between 2006 and 2015.

Among full-term births, babies born to rural women living within 0.62 miles of a well were 1.3 ounces (36 grams) smaller, on average, than those of their counterparts. This decrease in birth weight may seem minor from an individual clinical perspective, but such a downward shift at the population level can have significant implications for overall neonatal and infant health.

Finally, in urban areas, we found that pregnant women living close to high-production wells had a 4% higher risk of having a small-for-gestational-age baby.

Overall, these patterns persisted even after we took into account known risk factors for poor birth outcomes, such as maternal age, educational attainment, access to prenatal care, race/ethnicity, neighborhood-level socioeconomic status and other sources of air pollution.

Los Angeles is home to the largest urban oil fields in the U.S., with many wells just feet away from homes and parks.

Oil and gas production has been a major U.S. industry for over a century. Today the United States is the largest petroleum producer in the world. Over the past several decades, new extraction technologies such as hydraulic fracturing (“fracking”) have significantly increased the scale of production in states including Pennsylvania, Colorado and Texas.

Studies in Pennsylvania, Colorado, Texas and Oklahoma have found that living near active oil and gas wells may put pregnant women at higher risk of having low birth-weight babies, premature births and babies that are small for their gestational age.

California’s unique oil and gas infrastructure dates back to the early 1900s. As of 2017, the state was one of the top five producers of crude oil in the country, although production levels are declining. 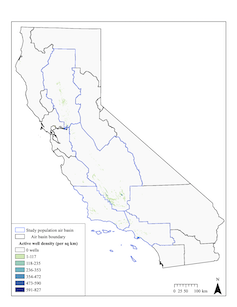 Oil and gas production in California occurs in both rural and urban settings. Operators primarily use conventional drilling and enhancement methods and, to a much lesser degree, hydraulic fracturing.

A 2017 study estimated that 2.1 million Californians live within one mile of an actively producing oil and gas well. But until now, no epidemiological studies had examined potential health risks in California.

There may be factors that we could not account for in our analysis that may enhance the vulnerability of rural pregnant women to adverse health effects of oil and gas development. Such factors could include chemical exposures related to maternal occupation, housing quality or dependence upon untreated groundwater sources for drinking water.

A 2019 Colorado study observed similar rural/urban differences, with an increased likelihood of babies being born with congenital heart defects among women living near high production oil and gas wells in rural, but not urban, areas.

While the number of studies on oil and gas is increasing, it remains unclear what aspects of oil and gas development pose potential harm to human health. Several hazards associated with intensive oil production, including air toxics, water pollutants, noise and excessive lighting, may each affect health differently. Better understanding of these different exposures and pathways would inform regulation and help prioritize pollution monitoring, emissions reduction requirements and exposure reduction strategies.

As Californians debate whether their state should expand oil and gas production, including issuing new drilling permits, results from health studies such as ours can inform current efforts to establish buffer zones between active well sites and the places where people – particularly vulnerable populations – live, go to school and play.

In our view, future studies should better characterize specific health threats posed by oil and gas production. Most importantly, we believe that research and regulatory efforts need to more fully engage people who live in fence-line communities near oil and gas production facilities, and to collaboratively identify and implement effective exposure reduction strategies that protect vulnerable groups.

Rachel Morello-Frosch received funding for this research from California Air Resources Board (# 18RD018) and the 11th Hour Project. She also receives funding from Cal-EPA, the National Institute of Environmental Health Sciences, and US EPA. She is also a member of the board of trustees of the Switzer Foundation and Grist.

Joan A. Casey receives funding from the National Institute of Environmental Health Sciences.