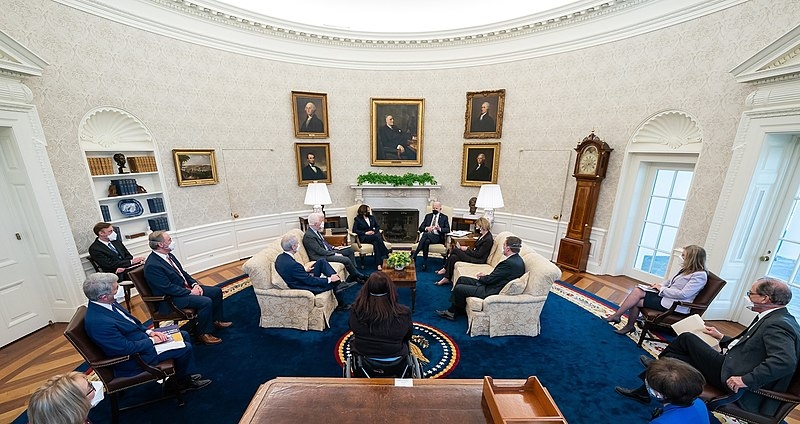 With the House successfully passing President Joe Biden’s $1.9 trillion COVID-19 relief bill, it is now in the hands of the Senate. Biden makes another strong push for the passage of the bill in his latest meeting with Senate Democrats.

Biden sat down with Senate Democrats in a virtual meeting Tuesday to talk about the sweeping COVID-19 relief package he has proposed. People knowledgeable of the meeting revealed to CNN that Biden told the Democratic lawmakers that in order to successfully pass the relief plan, they would need to accept some provisions that may not necessarily be favorable to them. Biden reportedly noted that they must show the American public that they are determined to respond to the ongoing pandemic and the economic collapse it has caused.

The President met with Senate Democrats for lunch for 15 minutes and did not take questions. Biden did not get into specifics with regards to the ongoing debates that are occurring within the Democrats in the upper chamber. The ongoing debates among Democrats have involved whether or not to reduce unemployment benefits to $300 a week from $400 a week as passed by the House. West Virginia Democrat Joe Manchin has said he supports the $300 a week level, but it has put him at odds with Delaware Senator Chris Coons, who opposed reducing the benefit.

Montana Democrat Jon Tester said that modest changes may ultimately be made to the COVID-19 relief plan in order for it to pass. Nevertheless, they all appear to agree not to reduce the overall cost of $1.9 trillion.

Meanwhile, Biden made an announcement regarding the COVID-19 vaccines. Biden announced that the US expects to be able to ship out enough COVID-19 vaccines for all adults until the end of May which is two months earlier than he had previously estimated. Biden also pushed for states to vaccinate teachers at least once by the end of March in order to speed up the reopenings of schools.

Pharmaceutical company Merck has also been announced to produce its rival Johnson & Johnson’s one-shot vaccine that has been recently approved by the FDA.