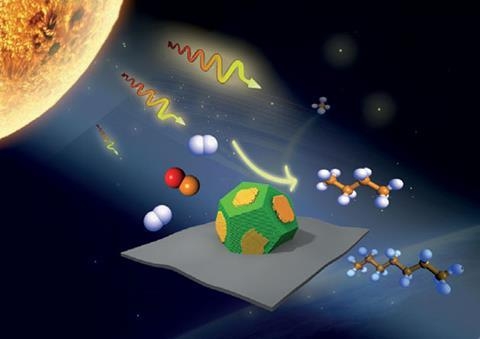 Using the catalytic mechanism, the institutes convert carbon dioxide into a chemical fuel simply with sunlight and water by focusing on the metal-support interaction between a stabilized copper atom and a titanium dioxide photocatalyst.

The Institute for Basic Science (IBS) has developed a photocatalyst that converts carbon dioxide into useful hydrocarbon energy.

After developing a monatomic copper-titanium dioxide catalyst by combining copper atom and titanium dioxide nanoparticles, the IBS succeeded in producing hydrogen with sunlight and water using the catalyst.

The three institutes then analyzed how the monatomic copper-titanium dioxide photocatalyst interacts with carbon dioxide on an atomic level.

Using the catalytic mechanism, the institutes convert carbon dioxide into a chemical fuel simply with sunlight and water by focusing on the metal-support interaction between a stabilized copper atom and a titanium dioxide photocatalyst.

The monatomic copper-titanium dioxide catalyst was designed based on their discovery that atomic-level metal-support interaction control leads to the generation of an active site where carbon dioxide conversion is efficient.

As a result, the optimized photocatalyst efficiently converted carbon dioxide into hydrocarbon fuels, such as methane and ethane, at an efficiency level at least 60 times higher than photocatalysts.

The institutes emphasized that to achieve carbon neutrality, carbon dioxide conversion into chemical fuels is an important step in reducing the use of carbon.

They added that through additional research, conversion into ethanol and propanol will also become possible.