Two manuscripts of the visionary, writer and composer St. Hildegard of Bingen (1098-1179) survived the Dresden bombings after a librarian stashed them in a bank vault. (Avraham Pisarek/Deutsche Fotothek/Wikimedia), CC BY-SA 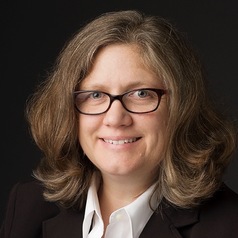 Seventy-five years ago, in February 1945, during the Second World War, Allied forces bombed the magnificent baroque city of Dresden, Germany, destroying most of it and killing thousands of civilians.

In central Dresden, however, a bank vault holding two precious medieval manuscripts survived the resulting inferno unscathed. The manuscripts were the works of the prolific 12th-century composer, writer and visionary, St. Hildegard of Bingen (1098-1179), who had established a convent on the Rhine River, near Wiesbaden and 500 kilometres west of Dresden.

Hildegard, whose writings documented her religious visions, including a theology of the feminine and an ecological consciousness, and who practised medicinal herbology, was venerated locally as a saint for centuries. The Catholic Church only recently recognized her as one, and also designated her a Doctor of the Church.

After the Dresden bombings, the Soviet Army seized and inspected the surviving vault. The first bank official to enter the vault afterwards found it pillaged, with only one manuscript remaining. The bank could never confirm if the vault was emptied in an official capacity or if it was plundered.

The missing manuscript has not been seen in the West since. The other made its way back to its original home of Wiesbaden, on the other side of Germany, through the extraordinary efforts of two women.

This is the story of how those women conspired to return the manuscript home.

In 1942, Gustav Struck, the director of the state library in Wiesbaden, became worried about local air raids. Following many European institutions, he decided that his library’s manuscripts needed to be sent elsewhere for safe keeping.

Two of the library’s most valuable possessions were manuscripts of Hildegard’s works. One was a beautifully illuminated copy of Scivias, a collection of 26 religious visions. The other manuscript, known as the Riesencodex, is the most complete compilation of her works, including the visionary writings, letters and the largest known collection of her music.

Why Struck chose to store the manuscripts in a bank vault in Dresden is still a mystery, but their journey there by train and streetcar mid-war is thoroughly documented.

The manuscripts sat in the bank vault for three years until the attack on Dresden.

Immediately after the war, the Americans sacked Struck in their denazification efforts. Librarian Franz Götting took over his job.

Götting inquired about the manuscripts as soon as mail service to Dresden resumed, and learned that the Scivias manuscript was missing, either seized or plundered, but that the bank still had the Riesencodex.

Götting asked repeatedly for the Riesencodex to be returned from Dresden to Wiesbaden. The difficulty was that Dresden was in the newly formed Soviet zone, while Wiesbaden was in the American zone. (The Allies had divided Germany into four occupation zones, and similarly divided Germany’s capital city, Berlin, into four sectors.) The Soviets had issued a decree stating that all property found in German territory occupied by the Red Army now belonged to them.

A scholar and medievalist in Berlin, however, came up with a scheme to retrieve the manuscript. Margarethe Kühn, a devout Catholic who expressed a great love for Hildegard, held a position as a researcher and editor with the Monumenta Germaniae Historica project. After the war she found herself living in the American sector of Berlin and working in the Soviet sector.

Photograph of the 12th-century ‘Risencodex’ manuscript. (Wikimedia/Landesbibliothek Wiesbaden), CC BY

Kühn had stayed at the Hildegard Abbey for several days in March 1947 and had even explored joining the Abbey as a nun herself. She must have heard while she was there that the Riesencodex was being held in Dresden without any promise of return. She devised a plan to help.

Kühn asked Götting for permission to borrow the manuscript for study purposes. Götting asked the Soviet-run Ministry for Education, University and Science in Dresden on Kühn’s behalf. Much to the librarian’s surprise, ministry officials agreed to send the manuscript for Kühn to examine at the German Academy, a national research institute established in 1946 in Berlin by the Soviet administration.

Kühn was convinced that the bureaucrats in Dresden would not recognize the Riesencodex. She decided that when returning the manuscript, with help from the Wiesbaden librarian, Götting, she would send a substitute manuscript to Dresden, and the original to Wiesbaden.

Kühn enacted the plan with the help of an American woman, Caroline Walsh.

How exactly Kühn and Walsh met is not known, but Caroline’s husband Robert Walsh was in the American air force and was stationed in Berlin as the director of intelligence for the European command from 1947-48.

In an interview in 1984, Robert explained that when he and Caroline were in Berlin she had “worked a great deal with the Germans and with the religious outfits over there, too.” Since the Walshes were also Catholic, it is likely that they and Kühn met through Catholic circles in the city.

Caroline’s position as the wife of a high-ranking military officer may have made it easier for her to travel across military occupation zones and sectors.

In any case, we know that Caroline travelled by train and car and delivered the manuscript in person to the Hildegard Abbey in Eibingen on March 11, 1948. The nuns notified Götting at the Wiesbaden library and returned the manuscript.

A Scivias illumination on an edition of Hildegard’s medical works. Beuroner Kunstverlag

Götting, meanwhile, had not found a suitably sized manuscript to stand in for the large Riesencodex to trick the Soviets. He instead selected a 15th-century printed book of a similar size and had sent this to Kühn in Berlin.

It took some time for Kühn to deliver it to the Ministry for Education, University and Science in Dresden, and two further months before anyone there opened the package in January 1950. By that time, Hildegard’s manuscript was safely in Wiesbaden. But officials spotted the deception and Kühn was in trouble.

An official in Dresden wrote to the German Academy in Berlin demanding to know why they had been sent a printed book rather than the Riesencodex manuscript.

Kühn’s boss, Fritz Rörig, who received the letter was furious with her. Rörig and Götting smoothed things over with Dresden by offering another manuscript in exchange. But Rörig told Kühn that the East German police were inquiring about her, the implication being that he had reported her.

Although she remained deeply worried for some time afterwards, Kühn never lost her job at the Monumenta nor was she arrested, despite Rörig’s threats. For the rest of her life she maintained a rare cross-border existence, living on Soviet wages in the American sector while continuing at the same job until her death in 1986, at the age of 92.

As one of many scholars who regularly consults the Riesencodex, now available online, I am enormously grateful to Caroline Walsh, and particularly to Kühn who risked her livelihood for the sake of a book.

I am not alone, however, in hoping that during my lifetime someone, somewhere will find the pilfered Scivias manuscript and return it as well.